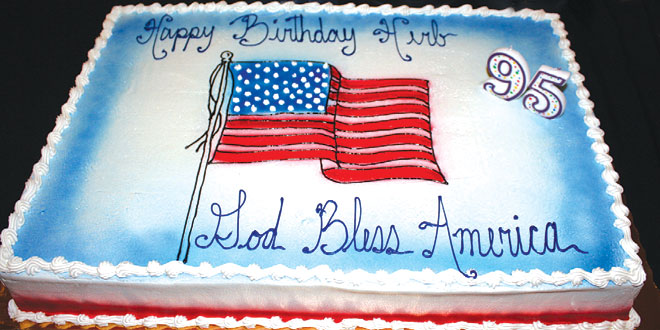 A beautiful cake was made in honor of Herb and a lovely dinner was catered by Kretch’s Kitchen. PHOTOS BY NATALIE STROM

More than 150 people gathered at the Rose History Auditorium at the Marco Island Historical Society to celebrate the 95th birthday of Herb Savage. The original architect to the Deltona Corporation, which created modern-day Marco, was delighted to have a birthday thrown in his honor. Most of his family and many good friends came together on Jan. 6 to join in the celebration of of his milestone birthday.

Many came with gifts and cards for Savage who, among many other things, is well known for his and his wife Emily’s beautiful rendition of “God Bless America” at many of Marco’s major events. This night was no different. At the end of the evening, Herb gave a funny and inspiring speech, and finished things

off with the patriotic song.

Before the night was over, many came forward to wish Savage a happy birthday and presented him with gifts and plaques.

General Manager of the Marco Island Marriott Beach Resort and Spa, Rick Medwedeff, discussed the history of the Marriott, which was originally a 50-room hotel, designed by Savage. Medwedeff gave Herb a two-night stay at the Marriott’s Presidential Suite as a gift.

Kevin Sullivan of Marco Island Sunrise Rotary read a letter to Herb signed by the President and the First Lady of the United States. Sullivan presented the letter on a plaque to Savage who was surprised and delighted.

Bette McGilvray, President of the Marco Island Area Association of Realtors, also presented a plaque to Herb as a thank you for

his architectural work over the years, ultimately creating such an amazing community.

Local lawyer Craig Woodward and good friends to Savage, Dick Shanahan and Jim Prange, also came up to speak of their friendships with Savage.

During the ongoing City Council meeting, a resolution was read aloud in honor of Herb’s birthday and work within the community and broadcast at the party. Although technical difficulties made it hard to hear, Herb later read the resolution aloud, and the partygoers stood and clapped. They stood and clapped many times for Savage.

Before closing with “God Bless America,” Herb addressed the crowd with his usual sense of humor stating, “I’m so honored. You have no idea how great it does me that I might decide to stay here another two or three more years!”