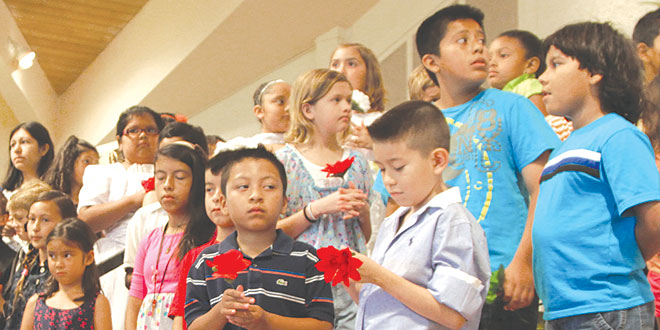 The children of the parish of San Marco Catholic Church honor Mary, the Mother of Jesus.

It is a Catholic tradition to honor Mary, the Mother of Jesus, during the month of May and to do so by placing on her statue a crown of flowers. This lovely devotional ceremony was held at San Marco Catholic Church in honor of Mary. Victoria Josberger organized the event which was sponsored by the Council of Catholic Women. The May Crowning gives the children in the parish family an opportunity to honor the Blessed Mother of Jesus, and to give thanks to her for bringing our Savior into the world.

Children met in the parish hall before lining up for a procession. They were escorted into the church by the Knights of Columbus. Once inside, they were led by Father Tim Navin to a beautiful statue of Mary near the altar. Each child placed a flower at Mary’s feet. Father Tim led 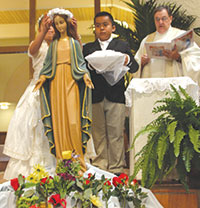 A statue of Mary, the Mother of Jesus, is crowned in annual May Crowning Ceremony. SUBMITTED PHOTOS

the mass and just before the crowning ceremony, he offered a meditation: “Mary was a woman of faith. Her willingness to say ‘yes’ to God serves as an example when God asks what seems impossible of us. Her life was shaped by her devotion to God. Even in difficult times, her faith sustained her. Though there was much that she did not understand, she accepted God’s will. She continued to believe in the midst of doubt. She continued to love and hope in the face of difficulties.”

All the children were invited back up to the altar. Kevin and Camila approached the statue to place the crown upon Mary’s head as Father Tim continued with prayer. While the song “Bring Flowers of the Rarest” was being sung by Janet Stapleton and the congregation, the children laid more flowers on the mantle in front of the statue of Mary on the altar.