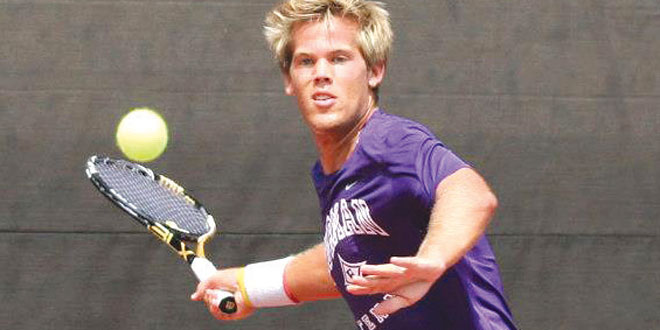 After we visited Matt at Furman University in Greenville, South Carolina (approximately 45 minutes from Ashville, North Carolina) as he won his big match against conference rival Davidson College, we had an opportunity to discuss his freshman year on campus.  Sidebar-Leslie Browne was a tennis scholarship athlete at the University of New Mexico and I was a Big Ten tennis player at the University of Iowa.  One great perk being an athlete- We did not have to stand in line to get books!

From the Furman Paladin’s media department, “Furman’s Mellow Named To All-“SoCon” First Team; Browne Selected To All-Freshman Team Browne, who hails from Marco Island, Florida., tallied a 12-9 overall singles mark and an 7-3 Southern Conference record, playing primarily in the third seed.  He recorded a 6-1 record at flight three and a 3-4 record at both flight four and flight five.  Brown teamed with junior Alex Christ in conference doubles matches, where he notched a 5-5 mark.

Matt Browne at Furman as he prepares for his favorite stroke, the forehand drive. Matt is a graduate of Tommie Barfield Elementary and the Charter Middle School on Marco Island.

DB: Give us a quick overview of your first weeks on the Furman campus as a student and as a tennis player.

Matt: I was a bit overwhelmed initially. I did not know too many people going in, nor did I know where any of the buildings were. Luckily, my roommate and I stuck together and quickly learned where our classes were, how to get our mail, which days to avoid the dining hall, and most other “unspoken rules”. As a tennis player, I was nervous playing with upperclassmen at first. I did not know them very well at all and I felt like I needed to prove myself as a player.

Matt: In high school, our practices typically lasted two hours. We mainly focused on playing matches with our teammates. In college, we spend a few days a week in the gym at 6:45AM doing various fitness activities. Starting around 3PM, we warm up by hitting balls with a teammate for about twenty minutes and then immediately get into drills. Some days we play practice singles sets, others practice doubles sets, and sometimes both. We also have scheduled challenge matches which are often three out of five sets, which give our coach a good idea of our match toughness. Our afternoon practices typically last three hours

DB:  Give us an idea of your fall tennis schedule.  Name the tournament, its location and the name of the school where you had your first college singles victory.

Matt: I played five total tournaments in the fall. Four tournaments were representing Furman and the other was an individual tournament in Florida. The first tournament I played was called the Southern Intercollegiate Championships. It was hosted by the University of Georgia. All of the top schools such as Vanderbilt, Georgia, Georgia Tech, Mississippi, and many more were there. I played my first match on Georgia’s Centre court against Stuart Tierney of Lipscomb University. I was able to win a close 7-6, 6-4 match.

DB: Did you always play matches on weekends?  If no, what days of the week did you compete and how do you handle missing school?  Do your college professors understand your absences and what do you do to make up the academic work?

Matt: Most of the matches I played were on weekends. However, I often missed my Friday classes because we would have a few hours to drive to get to our destination. Most of my teachers were understanding and let me make up my work. I was unlucky with one teacher who would not give me a fair chance to make up my work.

DB: Your college coach Kelly Jones has impeccable credentials:  Former number one ATP doubles player and has coached Mardy Fish and James Blake.  Give us some specific tools that he has added to your game?  What is your favorite coaching tip that he has offered and you have implemented?

Matt: Coach Kelly has really helped me with my backhand. When I first arrived at Furman, I did not have any confidence in it, so I could not hit it cross-court. Many hours spent drilling that stroke and a few other techniques have given me the confidence to hit my backhand with topspin and slice anywhere on the court. Overall, my shot selection has improved from every stroke. He has also stressed being patient with patterns and avoiding pulling the trigger too early.

DB: You traveled to LaJolla and played in a big time 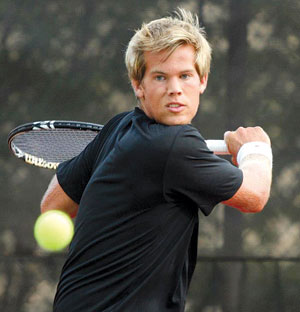 doubles event.  Explain this event and why do you feel Kelly scheduled it for your team?  A few days later, you practiced at beautiful Pepperdine in Malibu – What was that experience like and what was your favorite aspect of this unique event?

Matt: Our regular season schedule is very tough; we play a number of top ranked SEC schools. I believe Coach Kelly wanted us to get a taste of what the top schools on the west coast played like. I also think exposing us to such a wide variety of doubles teams only helped us handle all the different teams we faced in the regular season. Practicing at Pepperdine was a lot of fun. I made friends with one of their players I had played earlier in the year, so it was nice to see him again. Pepperdine’s coach is also a very nice guy who let us use their facility for whatever we needed. On top of that, Pepperdine is easily the most beautiful college campus I have ever visited. It is hard to beat looking over the Pacific Ocean.

DB: Tell us about your college match in Palo Alto, California.  Was it a dream to compete against Stanford and why?

Matt: It was quite an adrenaline rush playing at Stanford. Their campus is gorgeous and their facilities are top notch. They also have an incredibly successful program. A friend of mine from Florida played for Stanford on the court beside me, so it was nice to see a familiar face. What really made the experience exciting was being the last match on court, with every one of my teammates cheering for me and every one of my opponent’s teammates cheering for him. My aunt and cousin also drove down from Sausalito, CA to watch me play, so that added to my enjoyment. The match was very tight. I saved a couple match points to prevent him from serving out the match and later saved another match point, but my opponent, Daniel Ho was just too good that day. It was a wonderful experience despite not being able to win there.

DB: Give us the time requirements for a DI athlete?  Please map out your typical day.

Matt: My day either starts at 6:45 AM for workouts or 8:30 AM for class. It varies by the day, but my classes run from 8:30 AM-12:20 PM. After that, I grab lunch with a teammate or friends from my dorm hall. I’ll head back to my dorm around 1:00 PM and check my mail along the way. When I get back to my dorm, I usually try to take a nap to recharge before practice at 3:00 PM. Practice usually goes from 3:00-6:00 PM. I will then go into the locker room, change clothes, stretch, and drink more water to stay hydrated. After that, I will try to catch a ride to the dining hall from a teammate who has a car. We almost always eat dinner together until about 7:00 PM. I then rush back to my dorm and shower and change for study hall at 7:30 PM. As freshman, we are required to log in eight hours each week, so I typically spend 7:30-9:30 PM in study hall four nights a week. When I get out of study hall, I will either go back to my dorm to finish homework or if I’m finished, I will watch some TV in a friend’s dorm or play some guitar before quiet hours. Unless I have a huge test to study for, I’m usually in bed by midnight.

DB: Finally, if you were talking to a rising sixteen year-old junior tennis star on why he should stay in school and then aspire to play college tennis, what would you say?  Give us your pitch.

Matt: College is an incredibly enjoyable experience. Athletes do not have much free time, but building relationships with teammates is something you cannot get if you skip out on college tennis. As a team, we suffer together and we excel together. You can always count on someone to motivate you when you want to quit and you can always count on someone to give you a high-five for your hard work. We learn so much about each other just by spending so much time together. If you opt not to play college tennis, you miss out on all of the memorable van rides, plane rides, and stories that come along with them. Finally, you make lifelong friends by being part of a team, and that’s what is really important in life.

Doug Browne is the Hideaway Beach Tennis Director and the new Collier County USPTA Pro of the Year.  Additionally, Doug has been the International Hall of Fame Director of Tennis this past summer.  Doug has been writing a tennis column for the past fifteen years and welcomes your feedback.