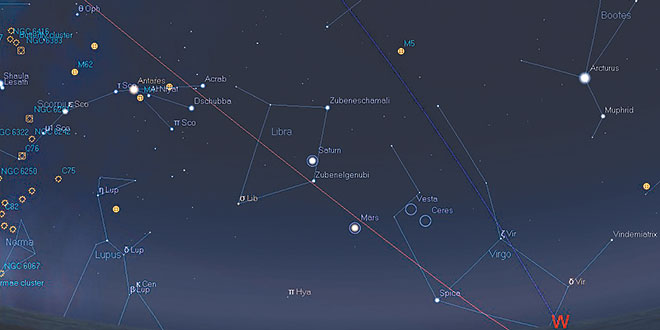 Tonight look to the west and among the brightest objects you will see there are Mars and Saturn. Mars is much closer to Earth than Saturn is, but a great deal further away than it was a few months ago.

It shows up in the planets magnitude — only at magnitude 0.65. Still, that’s good enough to be the brightest object in this area of the sky.

Mars is much closer to the Sun than Saturn is, and the Sun forces it to move much faster than Saturn. This is easy to observe during the next two weeks as Mars, moving eastwards, visibly closes the gap between the two planets every night, passing Saturn about August 25, while Saturn barely moves at all. When two Solar System objects appear to pass close to one another astronomers call it a conjunction. The event commonly happens to planets and has no real significance except visual beauty. In reality, Mars and Saturn are not close together at all; they are separated tonight by some 800 million miles.

Close by Mars is a conjunction in progress by two other objects, the brightest asteroids in the Solar System, Vesta and Ceres. Invisible to the naked eye, they are best spotted by binoculars where both will fit into the same field of view. It would be wise to attempt observation earlier in the evening when they are higher in the sky (if the clouds will let you). Also try again in a few days when the Moon is not in the sky.

The star Antares is also in the west tonight, well to the left of Saturn. Antares, translated from the Greek, means “rival of Mars,” and you can easily see that it well deserves the name. Mars and Antares are currently of similar brightness which makes the comparison easier — both are bright red. Astronomers classify Antares as a red supergiant, an excellent term; if Antares were substituted for our Sun, it’s surface would be well beyond the orbit Mars.

Mr. Usher is  a Director of the Everglades Astronomical Society which meets the second Tuesday of the month Sep. thru May at 7:00PM in the Norris Center, Cambier Park, Naples. E-mail: usher34105@earthlink.net