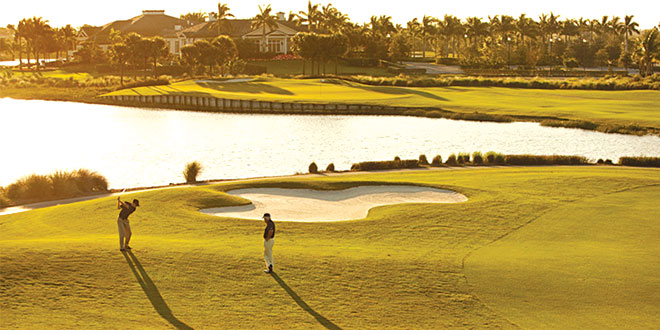 Later this month, the Marco Island Marriott Beach Resort, Golf Club & Spa will begin a six-month, $4 million renovation to its award-winning Rookery Golf Course. The course will close until November.

The project announcement comes on the heels of a number of accolades for golf on Florida’s Paradise Coast — Naples, Marco Island and the Everglades. First, the International Association of Golf Tour Operators (IAGTO) — which held its annual meeting at the Marriott — selected Naples, Marco Island and the Everglades as its 2014 Golf Destination of the Year for North America.

According to Robert Pfeffer, director of marketing for the Marriott, the renovation plans go one step further, with the goal of making The Rookery one of the top 100 courses in the country. The project will feature the installation of wall-to-wall Platinum Paspalum turf on the par-72 course, as well as a soft goods upgrade to the course’s clubhouse and a return to an “Old Florida” interior theme, including new furniture, flooring, lighting and paint.

“As one of South Florida’s premier golf destinations, our goal is to move our golf product from great to legendary with these improvements,” said General Manager of Golf Chris Major. “Keeping our prestigious courses up to par is a priority.”

On the course, bunkers will be the focus, and the team of Peter Jacobsen and Jim Hardy of Jacobsen and Hardy Golf Course Design will change up many of the course’s bunker complexes to enhance the visual appeal. “Each golf course has a unique character in large part to the collection of bunkers,” Jacobsen noted. “We are excited about enhancing and updating the bunkers at The Rookery to improve the playability and overall golf experience.”

Marco Island’s Marriott has always been in the golf business with The Rookery as its jewel. In 2004, the course became a resort, private golf course, meaning only members of the course or guests from the resort can play on it. Hammock Bay Golf and Country Club became part of the Marriott family in November 2011, and it too is a private course.

Currently, Marriott boasts 350 golf members who enjoy swinging their clubs at both The Rookery and Hammock Bay on alternating days. To be sure, membership has its privileges, and members also have access Marriott’s beach, spa and other resort amenities.

“Our membership is robust at the moment,” Pfeffer said.

While The Rookery is under construction, members and resort guests will be able to play at Hammock Bay, which also was designed by Jacobsen and Hardy. Further, added Pfeffer, all private courses in the Naples area participates in reciprocal play during the summer months: “Golfers can pretty much play any course in this area as part of reciprocity here in the summer.”