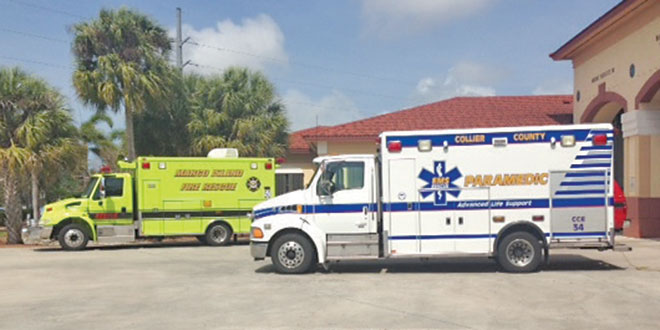 On March 22, Marco Island City Council presented a resolution to the Board of County Commissioners (BCC) asking Collier County to support Marco Island’s future application for a Certificate of Public Convenience and Necessity (COPCN), a certificate that would allow Marco Island to provide its own emergency medical services (EMS) paramedic and transport services.

Florida state statute requires that a municipality obtain a COPCN via the county to provide EMS services. At this time, Marco Island and Collier County EMS work together in an interlocal agreement. Some concerns of the future of this agreement have come about with the county’s strategic plan to create an independent consolidated fire/EMS district, as presented to the unincorporated areas of Collier County in a March 15 straw poll.

Commission Chair Donna Fiala remarked on the “unified body” of support among Marco Islanders regarding this issue. The resolution was simply presented to receive an indication of good will and good faith support from the BCC prior to Marco Island’s formal request for the COPCN. City Manager Roger Hernstadt stated that the purpose of the resolution was to send a message to the people of Marco Island that the city and county would work together in making this decision. Currently, the city is working with consultants from Fitch & Associates to provide the specifics and data to support this request.

Commissioners Fiala and Hiller voiced their support of the resolution. However, Commissioners Nance, Henning and Taylor voiced some concerns. They saw no reason for the resolution and questioned much of the wording. Commissioner Nance said that he hopes Marco Island will base their request for a COPCN on data, “not emotions,” while Commissioner Taylor said, “The issue has been blown out of proportion.”

Marco Island City Council Chairman Bob Brown said, “This is a positive thing we are trying to accomplish,” noting that our level of fire rescue service has impacted the county in a very positive way. All of the county commissioners agreed that the interlocal agreement between the Collier County EMS and the City of Marco Island has been “awesome.”

Although none of the commissioners voiced their opposition to Marco Island’s request for a COPCN, Commissioners Henning, Taylor and Nance would not vote to approve the resolution, as it was presented. Instead, Commissioner Henning made a motion that the county would withhold their decision until a formal application with supporting data is submitted by Marco Island. Henning said that he would not be against the request, once the application is submitted, as long as Marco Island did not request money from Collier County to operate its own EMS.

Commissioners Fiala and Hiller were the only two commissioners that voted to approve Marco Island’s proposed resolution at the meeting. Commissioner Henning’s new motion, which did not close the door on Marco Island obtaining a COPCN, was passed unanimously.

In a related story, the litigation between the North Collier County Fire District and the county has ended. The settlement agreement has approved the issuance of a one-year COPCN to the district. The county previously denied the renewal of this certificate. That situation was a component in the “red flag” alert to Marco Island regarding the future of advanced life support (ALS) service there. With the COPCN, the North Collier district’s more than 100 paramedics may continue to provide ALS services to their entire 264 square mile service area.