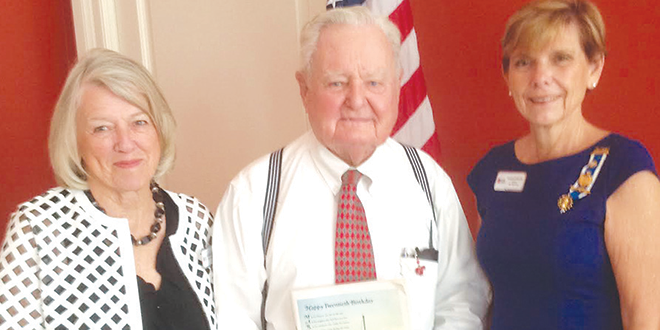 Herb Savage had 50 years of Marco Island stories to tell the Daughters of the American Revolution at their March 19th meeting at the Hideaway Beach Club. Herb Savage and his wife, Emily, came to Marco in the early sixties from Miami at the request of the Mackle Brothers, as the brothers embarked on their dream of developing Marco Island. At age 96, Herb still goes to his Marco office very day in a tie and long sleeved shirt, a standard, he says, of the Mackle brothers business culture. Herb said it began when three Mackle brothers, Robert, Elliott and Frank bought Marco Island for development. They wanted to make the island a residential community for young, working families and retirees. Herb designed modest, affordable homes with a Polynesian theme. When Marco Island opened officially on January 31, 1965, 25,000 people came to see the models. Twelve models were built adjacent to original the yacht club on the water and ten models were built where City Hall now stands, inland. Each house was designed as a “see through” house where you enter the front door and see through living room to the lanai and to water, in most cases.

In 1965, a one bedroom, one bathroom plus garage home listed for $19,000. The largest home listed for $45,000. The Mackle brothers donated land on the beach, churches, a synagogue and a school to the community, all to guarantee the original family focus of the development. Herb told the group about his early designs; the Marco Beach Hotel and

Villas (now the Marriott), the Gulf View and the Emerald Beach condos. And you still can see his Polynesian design of some of the older houses still standing on Marco. Herb said he is amazed at the development of Marco in the past fifty years and wishes he were younger so he could enjoy what is available for recreation. For example, he raced sailboats when he was younger. Herb’s latest contribution to modern Marco is his forward to the new history book of Marco Island by Michael Coleman, Marco Island, Florida’s Gulf Playground. Also at their meeting, current DAR members honored one of their early members, Helen “Bobbi” Hanson, a past Regent of the chapter. Her daughter, Deborah Hanson-Philip presented the 20-year certificate.

The Marco Island chapter has grown steadily since it was formed in 1976. Today, there are 44 full-time members and 18 part time associates. Herb Savage, who still wears his WWII uniform at all patriotic and military events, closed the meeting by leading the members in his signature, rousing rendition of “God Bless America.” You can learn more about the history of Marco Island at the Marco Island Historical Society and Museum, www.themihs. com and from the new history book of Marco Island, Florida’s Gulf Playground, www. marcoislandbook.com. The Marco Island Chapter of the Daughters of the American Revolution holds its monthly luncheon meetings at 10:30 AM on the third Thursday of each month. It welcomes potential members and members from other chapters who are living in or visiting the area. For further information, please call Karen Lombardi at 239-394-0028.