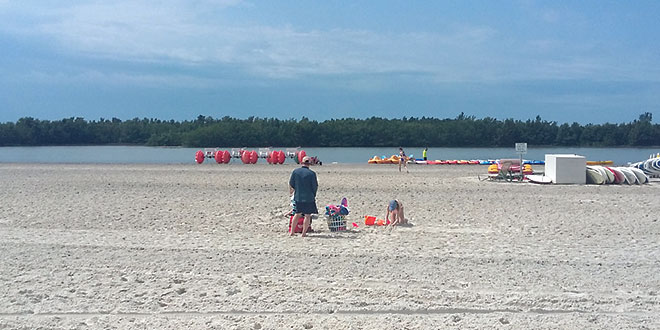 The soft, tilled sand is inviting to this family playing on the beach.

OUR ISLAND ECOLOGY
By Chadd Chustz

This spring, so much has happened here on Marco Island to remind us that we are stewards of our environment and nature’s inhabitants.

The manatee (identified as RSW1523) was rehabilitated at the Lowry Park Zoo in Tampa after being rescued on September 28, 2015, for watercraft related injuries in Roberts Bay. It was great to see this “little guy” being released back into the waters of the 10,000 Islands by the FWC at Caxambas Boat Launch Park on Marco Island. Read more about another manatee release in this issue of Coastal Breeze News.

resident off of Beachcomber Street on Marco Island. The raptor became trapped inside the lanai and flew into the screen resulting in head trauma. Sharp-shinned hawks are the smallest hawk in North America, often appearing in a blur of motion and disappearing in a flurry of feathers.

Collier County is testing a new tiller at Tigertail Beach, and the results are impressive! The tilled sand is light and fluffy, markedly improved from the conventional raking that had been done previously. In spots that hadn’t been tilled, it was like stepping back onto a concrete sidewalk. I did my own “finger test” two days after the tilling, and felt the marked difference in 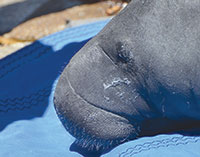 It took a team effort to release this rescued manatee back into the water. Photos By Chadd Chustz

the hard, non-tilled sand and the soft, freshly tilled sand. But the most important test came from a family who was building sandcastles in the fluff, a sight a beach concessionaire commented, “hadn’t been seen for a while around here.” Approval to budget for the new tiller will be coming in front of the Collier County Coastal Advisory Committee in the coming months, but for Tigertail Beach-goers, it can’t come soon enough.

Enjoy regular updates and insights on Marco Island nature and wildlife, straight from the desk of the City of Marco Island Environmental Specialist, Chadd Chustz. If you have a topic you’d like to see covered in this column, or a question you’d like answered, contact Chadd at 239-389-5000.