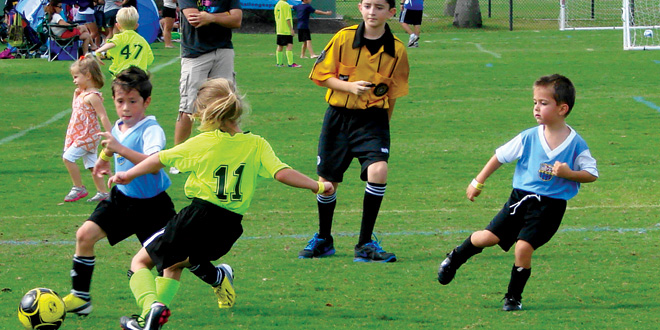 The Under-10 Boys Surge took first place in the recreational bracket under coaches Mario Guzman and Mike Wesson. “They played their hearts out and won,” said Coach Wesson.

The Under-10 Girls finished third with three wins and three losses, losing by a total of only four goals for the three games. “We played the undefeated team twice, and lost by two and one goal, so we were in each game until the end,” said U-10 Girls Coach Cory Maile, “They played well!”

The Under-13 girls played in the higher level “competition” division and took third place under Coach Wesson.

With no other girls teams to compete against, the Under-7 Surge girls team played in the Boy’s U-6 recreation division, and were able to tie in one game. “The girls gave a great effort and came together as a team,” said U-7 girl’s team parent Tina Nash. “I am very proud of how hard they played.”

All five Marco Island Surge teams weekend qualified them for a shot at the National 3 vs 3 Soccer Championship this August, where they will compete against top-notch teams from around the country at the ESPN Wide World of Sports Complex in Orlando.