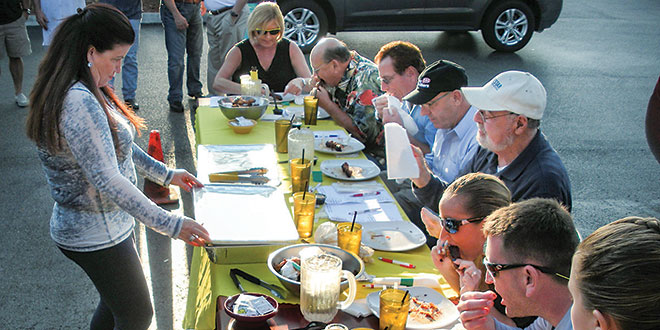 The judges sample the contestants’ wares, as Lynette LaCava looks on. PHOTOS BY DON MANLEY

They came, they grilled and in the end, big fun was had by all.

Such was the lot of the contestants, the judges and the bevy of enthusiastic onlookers who turned out for the Marco Island Brewery’s Fourth Annual Rib Cook-Off, which benefits the Marco Police Foundation Scholarship Fund.

The Brewery-sponsored event saw eight contenders vie to be selected as one of the three preparers most skilled in barbecuing that gustatory delight — the pork rib.

In the end, it was cook-off newcomer Jim Gratkowski of Gratkowski Painting Contractors, who snagged the first-place trophy with a recipe he cobbled together mere days before the event.

“I grabbed a bunch of ribs from Publix and practiced all week,” he

said, while celebrating the win with family members. Regarding a title defense, Gratkowski chuckled and said, “After this display this year, I know I’m going to win next year.”

Dechaine took second place, while third place went to Riddle, who was the 2014 champion.

“This was our biggest one yet,” Joe Granda said of the $5,000 the event raised for the scholarship fund, through raffles, a silent auction and the sales of barbecue dinners to onlookers. Granda, the foundation’s outgoing president and 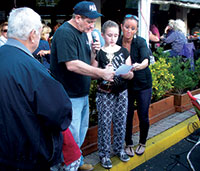 a member of its executive board, was the event’s organizer.

Both he and Curt Koon, the foundation’s 2015 president, praised Frank LaCava for not just sponsoring the Cook-Off, but also donating the meat to contestants, the barbecue meals that are sold and even the trophies.

“There are not enough words to say, ‘Thank you, Frank, for all you do for the police foundation and for our city,’” said Granda.

Frank LaCava views such actions as a natural thing.

“I’m very family oriented,” he said. “I have a lot of grandchildren. The island is a small community. It’s given to me. Everything is not all about the money, so I do several fundraisers throughout the year where I feel we can

Jimmy Downey hams it up with a steak.

Judging was handled by Marco City Manager Roger Hernstadt, Steve Stefanides, John Arceri, Mary Quinton, Eddie Russo of Cheyney Brothers food distributors, Jamie La-Cava Shea and Sean Shea. Each entry was assigned a number, and they assessed them based on such factors as taste, texture, tenderness and the smoke ring on each rib.

Jimmy Downey, owner of Wild Jimmy’s Beef Jerky, was at the cook-off as a volunteer, assisting the joint police and fire-rescue team and with setting up tents for the event.

“It’s a lot of fun getting all the people to come out, getting the community together, the fire department, the police department,” said Downey. “This is a lot of fun. It’s all about charity and helping everyone out here.”