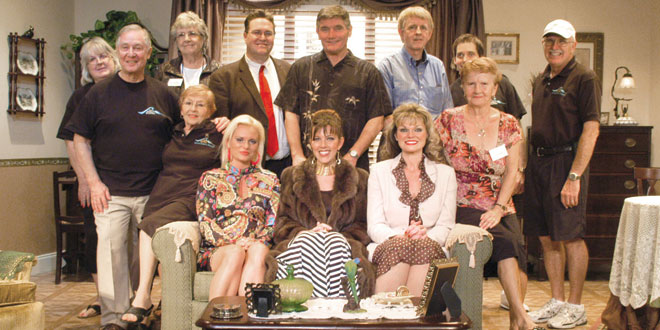 The Marco Players Theater is setting its sights on the 2013 season and beyond.

After 40 years in the business, the 501(c)3 non-profit theater’s board of directors, marketing team, actors, directors and volunteers have created a successful style of choosing plays, selecting cast members and entertaining its audiences – around 5,000 or so per year.

The live performance art group “was started in 1973 by residents that wanted a kids theater, as I understand it,” explains Beverly Dahlstrom, President of the Board of Directors for the theater. “It just grew from there.”

Thirteen years ago, The Marco Players found a permanent home at the Marco Town Center Mall. Performances were held at any venue that could fit them before finding the location just across from The Crazy Flamingo and next to the Marco Island Brewery.

“When we first moved in, the floor was flat and the stage was extremely high.

Denise Waters, Beverly Dahlstrom and Pat Kaikini sit in the theater with it’s vibrant red seats, professional lighting and dark back drop – the perfect setting for a play. PHOTOS BY NATALIE STROM

In our second year we received a grant and built the tiered levels and seating,” adds Dahlstrom.

But there was still one glaring problem: the pole. A support beam ran almost directly down the center of the front of the stage. “No matter where you sat, the pole was in the way,” adds Marketing Consultant Denise Waters.

Enter Pat Kaikini, a Marco resident who came to see a play, was bothered by the pole, but enjoyed the theater. He joined the board five years ago to help solve the problem. As luck would have it, Pat was an architect and designed a new support system that enabled the pole to be removed.

“After we removed it, it took a while to accept that the pole wasn’t there,” jokes Dahlstrom. It did, however, offer the actors and directors leisure when it 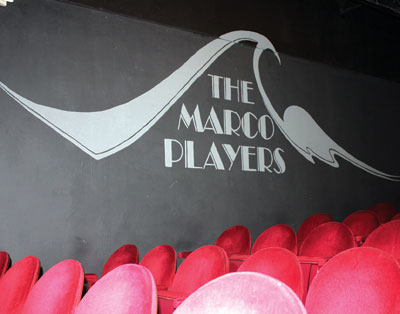 came to choosing stage direction. No longer would the pole disrupt the audience or the actors.

Other changes over the years have included the addition of a beautiful wood front door, a box office window, a chandelier in the front entrance and local artwork hung throughout the hallway of the theater that changes with every performance.

Choosing the shows every year is no easy task. Approximately 40 plays “try out” in front of the Play Reading Committee. Every play is read and the “contestants” are whittled down to six choices. From there, the board decides the final four. Currently, plays are being decided for the 2014/2015 season. “By February we will have plays for next year,” states Dahlstrom.

Still, with a crew made up of all volunteers,

Script rehearsals, board meetings and play reading workshops are vibrant and intense. PHOTOS BY DENISE WATERS

many of which have families and work regular jobs, running a community theater can be “like rolling a boulder up hill. We work hard all 12 months out of the year.” The show season lasts five months, from December through April, not including actor try-outs which begin as early as September.

Auditions for the children’s play, “A Christmas Story,” were just held on September 5 and 6. Performances will begin on December 20.

“Absalom” will be the first play of four for the regular season. Auditions are fast approaching, to be held on September 9 and 10. Performances will begin on November 6. “It’s a drama about a dysfunctional family,” says Dahlstrom. “We try to mix it up a bit every season. We always have at least one crazy comedy, one that our audience can really relate to and always one that moves people.” “Absalom” falls under the relatable/movable category. 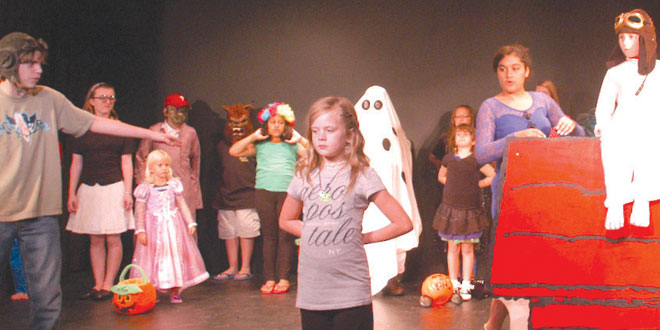 other three plays include “The Fox on the Fairway,” “Apartment 3A” and “Art.”

“‘Fox on the Fairway’ is about golf, which many can relate to down here, where ‘Art’ is about a wealthy man who buys a painting and it’s a blank canvas. It’s about art, friendships and relationships. ‘Apartment 3A’ is our comedy, and it was written by actor Jeff Daniels,” explains Dahlstrom.

As auditions begin, The Marco Players Theater welcomes actors of all kinds, whether they be beginner or professional. Says Dahlstrom, “Don’t ever be afraid if you have a passion.”

That passion lives in the five-member board, the 50 to 60 loyal volunteers, and the directors and actors who continue to push the boulder up hill at The Marco Players Theater, making positive strides and entertaining audiences. The enthusiasm for the theater continues even after 40 years.

To learn more about auditions, performances and how to volunteer, visit www.themarcoplayers.com or call the box office at 239-642-7270.