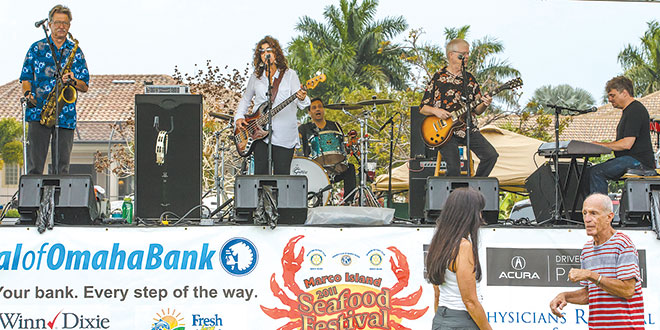 For the past five years, the Marco Island Seafood and Music Festival ran over a weekend, Saturday and Sunday. This year, the schedule was changed to Friday and Saturday, and by all accounts, being open on Friday was a huge success!

“We had a steady flow of guests on Friday with a spike early evening at 6 PM,” said Stan Niemcyzk, founder of the Marco Island festival, which has become one of the biggest events the island holds annually.

Entertainers performed all day, including the ever-popular Jim Long, with the internationally acclaimed “Satisfaction,” a Rolling Stones tribute band topping off the evening. Feet were moving and hands were clapping as “Mick” strutted the stage. Only the genuine Mick could

have done it any better! The audience loved the repertoire of Stones hits!

Saturday began strong, but by afternoon, clouds that loomed all day let loose. Still optimistic, the decision to close the event was not easily made. DJ Steve Reynolds, Deb and the Dynamics and others had entertained the crowd all day and provided for plenty of dancing opportunity.

All in all, although a wet Saturday afternoon, plenty of seafood and landlubber fare had been downed, along with plenty of beer, wine and lemonade.

The success of this year’s Marco Island Seafood and Music Festival had yet to be tallied at press time. Proceeds from the event go to support the charitable efforts of the Sunrise Rotary Club, the Kiwanis Club of Marco Island and the Noontime Rotary Club. Plans for next year’s festival are already underway.