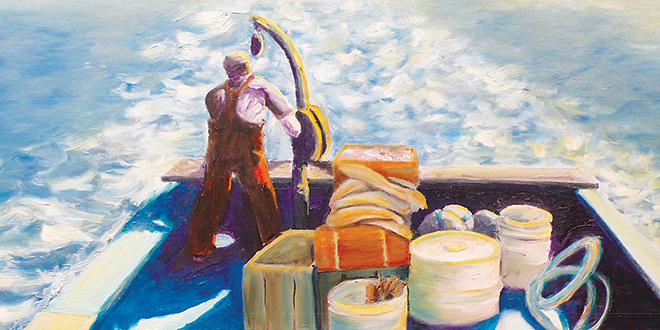 The Marco Island Center for the Arts is exhibiting “Work” themed art. “Work It 24/7” displayed in the main gallery, reflects people working on Marco Island and has been judged by Jack O’Brien from the Naples Art Association. The exhibit is presented in conjunction with the Marco Island Historical Museum display of the nationally touring Smithsonian exhibit “The Way We Worked” which examines the creativity and strength of the American workforce. “The Way We Worked” exhibit is on display at the Marco Island Historical Museum until May 16, 2015 but the Center’s art exhibit is only on display through the end of April, 2015. “Work It 24/7” includes first place winner Sternman by Tara O’Neill, second place All In A Day’s Work by Joseph Parisi, third place Catching Dinner by Ieva Straatman and honorable mention award winner Bridge Work by Donald Sunshine. The Rush Gallery will display an exhibit of Marian Howard’s work, “Working in the South.” Howard has been a full time artist for over 42 years. She is a native of Savannah, Georgia who now makes her home in Morristown, New Jersey. Howard has exhibited in many one woman shows as well as group exhibits. “Working in the South” features paintings reflecting working in the South, while other works of Howard include floral birds, African motifs of people of color and mixed media works and landscaping. Howard’s paintings have been sold all over the world and her patrons range from as young as eight years old to those over 80 years of age.