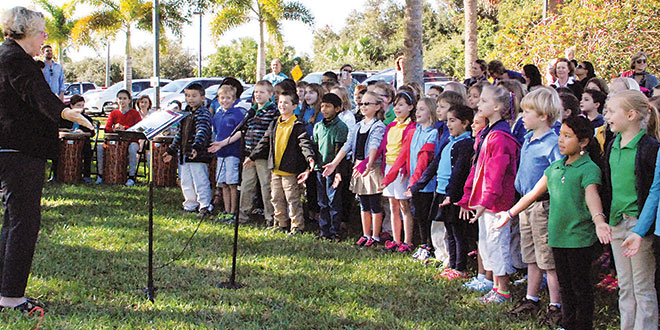 The brainchild of Julius Sterling Morton, a Nebraska journalist and politician, the first Arbor Day took place on April 10, 1872. According to arbor-day.net, Morton felt that Nebraska’s landscape and economy would benefit from the wide-scale planting of trees, and he set an example by planting orchards, shade trees and wind breaks on his own farm while urging his neighbors to do the same.

When Morton became a member of Nebraska’s state board of agriculture, he proposed that a special day be 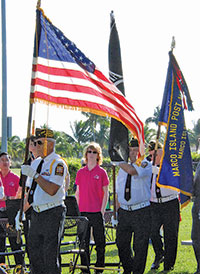 The Colors were presented by members of the local VFW and American Legion posts.

set aside dedicated to tree planting and increasing awareness of the importance of trees, and Nebraska’s first Arbor Day was born. More than 1 million trees were planted. A second Arbor Day was held in 1884, and Nebraska made it an annual legal holiday in 1885, using April 22 to coincide with Morton’s birthday.

In the years following the first Arbor Day, Morton’s ideas spread beyond Nebraska to Kansas, Tennessee, Minnesota and Ohio. Today, all 50 states celebrate Arbor Day although the dates may vary in keeping with the local climate and planting seasons. At the federal level, President Richard Nixon proclaimed the last Friday in April as National Arbor Day in 1970. In Florida, Arbor is celebrated on the third Friday in January.

The city of Marco Island has long celebrated Arbor Day, and for the last five years, it 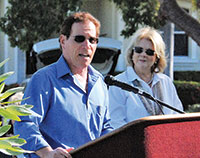 has been designated a “Tree City USA” community by the Arbor Day Foundation. The Tree City USA program is a national program that provides the framework for community forestry management for cities and towns across America.

During this year’s Marco Island Arbor Day ceremony, those in attendance were welcomed by Beautification Advisory Committee Member Linda Turner. The Rev. Dr. Kyle Bennett of St. Mark’s Episcopal Church blessed the tree, and the Colors and Pledge of Allegiance were presented by members of the local VFW and American Legion posts. After Marco City Manager Roger Hernstadt greeted everyone, Beautification Advisory Committee Chairwoman Susan

Members of the VFW attended the event. PHOTOS BY NOELLE H. LOWERY

While blessing the tree, Rev. Bennett took a moment to remind the audience of the importance of trees in our world and of being good stewards of the land in which they are planted. “Let us all take a positive action to make the world a better place,” he said. “Life is a better place when we live among the trees.”