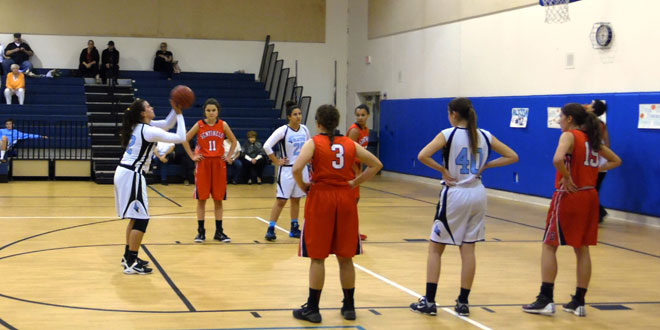 Players watch as Manta Rays’ Victoria Vale takes aim on one of two foul shots in game against Evangelical Christian. Vale led the team with 15 points in its loss to Evangelical.

The win on Jan. 16 resulted in the Manta Rays going undefeated in the district at 6-0. In the Seacrest win, Stretton scored 27 points, the lone Manta Ray in double figures.

Strong on defense was Tyler Gresham. Coach Roger Raymond said, “Tyler is a very young player in terms of experience. As a sophomore player, his 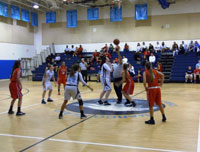 Manta Rays’ Sarah Colburn has the height advantage as the referee tosses the ball to begin the game with Evangelical Christian.

varsity experience is “on the job” training. He basically sat out last year, and he has to make up for that missed time. His rebounding is very good as he is a force on the boards on both ends of the floor.” 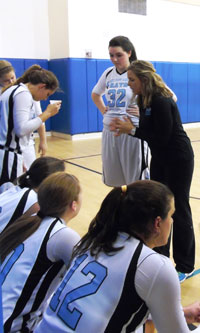 Kelly Monnot, normally the volleyball coach, talks with the MIA girls basketball team before its game with Evangelical Christian as coach Greg Fowler was at night school to advance his teaching career.

The Rays boys team celebrated with a convincing win over Evangelical Christian, losing 63-43.

The girls had a much tougher time with a very good Sentinels team, losing 73-27. Vale, who has been the stalwart for her four years, tallied 15 points. Holly Golden dominated with 30 points for the Sentinels, 22 in the first half. Freshman Gianna Rose is gaining valuable experience at the point and tossed 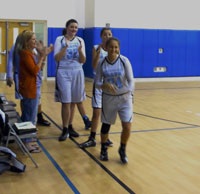 The Marco Academy girls basketball team claps as senior Jessica Ragan is about to go shake hands with one of the Evangelical Christian players before the game. Cheering with them is Melissa Scott, school principal.

The Lady Manta Rays are 8-6 on the season. The team finished the district season tied for first place at 5-1, but lost a coin flip so that Seacrest will get top tournament seed and the Manta Rays second seed. Everglades City hosts the tournament. The Rays open with Everglades City at 6:30 PM on Tuesday (Jan. 27). The Rays are favored to make the championship game at 7 PM on Thursday (Jan. 29).