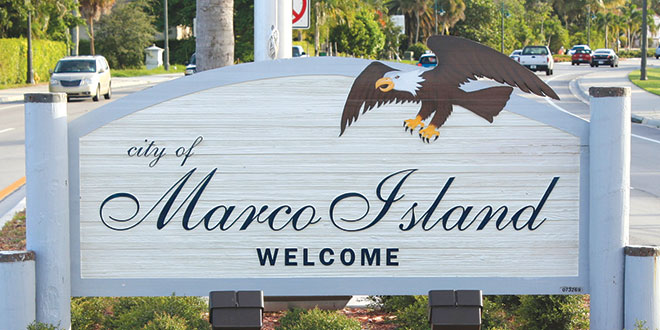 During the city’s first 2015 budget workshop, City Manager Roger Hernstadt and Finance Director Guillermo Polanco proposed what some are calling an aggressive and gutsy five-year plan to streamline Marco Island’s general fund finances and get the city out of debt.

To be sure, Marco Island’s overall financial outlook is healthy. By September 30, 2014, the city will have $11 million in reserves, along with $4.3 million set aside in its emergency reserves. According to Hernstadt, this $4.3 million amounts to three months of operating expenditures for the city. “We act as if we don’t have it,” he told City Councilors during the workshop.

Still, the city is struggling with how to pay its unfunded pension liabilities ($5.7 million) and is facing major capital improvement and infrastructure projects over the next five years, including a $12.1 million capital improvement plan, fleet management costs of $4.7 million, the Mackle Park Community Center ($3.5 million), the Smokehouse Bay Bridge ($6.7 million) and streets and drainage repairs ($4.9 million).

The budget proposal looks at these needs and unfunded liabilities — and with the help of a 10 percent millage increase based on the rollback rate and a conservatively projected 2 percent increase in property values — makes them disappear in five years while also helping the city plan and save for future needs. Essentially, this would amount to an extra $60 in annual property taxes for a $500,000 home. That is just $5 per month, Hernstadt pointed out in an interview on April 28.

“The city needs $5 million annually to meet its needs,” he further explained. “These are recurring needs to support the current operation…In the past, the city has just funded it as it went along, and we haven’t always had enough money to address the issues. We can continue to put ourselves in these situations to borrow money and put ourselves at the mercy of prevailing interest rates, or we set money aside. The analogy is choice. This is about having prudent financial planning to have money on hand to meet ongoing needs for the city…It is a very prudent way for the city to move forward and take the risk out of the future.”

While the City Council and Marco Islanders mull over this proposal, two additional issues surfaced during the budget discussion that are sure to keep folks on the edge of their seats. First is the utility budget, which City Council will discuss during another budget workshop in May.

During the budget kickoff workshop, though, it was mentioned — by more than one person — that $2 million of the $6.9 million the city received last summer after refinancing an old utility bond issue had been used by utility officials without City Council authorization.

While the question was not answered during the budget workshop, Hernstadt said in the April 28 interview that the bulk of the $2 million had been used by the utility for the recently awarded but unfunded $1.8 million seawall project. He acknowledged this situation and the fact that the utility’s CIP is unfunded has thrown the spotlight on utility budget. In fact, when the utility budget is proposed, Hernstadt speculated it will probably look a great deal like the recently released general fund plan.

“We have to understand what the recurring capital needs are, find out how much money that is, and acknowledge that amount in the rates,” Hernstadt said. “How much money do we need to be accumulating to deal with future needs of the utility? A utility is a zero-sum game. If you save money, I am going to lose money. The question is are the costs being fairly distributed.”

“What is our policy going to be,” he continued. “The utility CIP is not a funded CIP. It is a list of projects that have been identified as being needed, and it is funded on a contract-by-contract process. That is not a bad idea if you have the money. We need to position ourselves so we have the money in hand to meet the needs. In any good plan, you don’t fund 100 percent of everything, and we recognize that there are other vehicles. But to play roulette, that is not really the best way to manage an organization.”

Currently, 11 employees have contracts, including department directors, the city clerk and the fire and police chiefs, and all of them have a severance clause. Hernstadt said this is not necessary for two reasons. First, Hernstadt classified these employees as being “long-term directors.”

“They should be secure in their employment,” he noted. “If they are doing their jobs well, there is nothing to be concerned about.”

Second, the city of Marco Island as an employer has a very generous leave time policy, allowing employees to accumulate 720 hours which they are entitled to upon leaving the city’s employ. That is the equivalent of 90 work days, or about 18 weeks.

At the end of April, Hernstadt already has spoken to the employees impacted by this policy change, and City Attorney Burt Saunders was preparing a formal notice. When asked if he had any concerns about the changes, Hernstadt said, “I don’t think anyone is going to leave who didn’t have plans to leave already.”