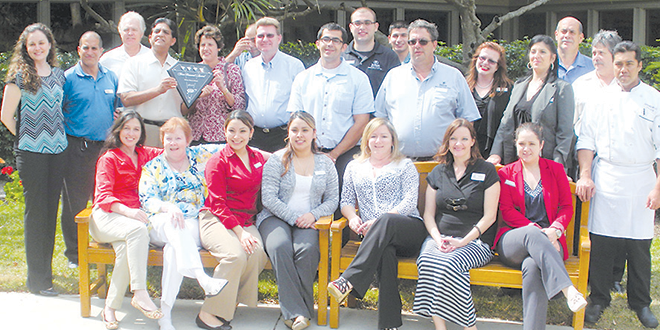 The Hilton Marco Island Beach Resort & Spa has done it again. For the 16th consecutive year, the hotel has received the AAA Four Diamond Rating, making it one of 4 percent of AAA approved hotels and restaurants to receive the honor. “This could not be possible without the great team we have,” said Mac Chaudhry, Hilton Marco Island’s general manager, at the award ceremony, held recently at the hotel. An extensive array of amenities and guest services, and a commitment to providing attentive, personalized service in comfortable, high-quality surroundings is typical for hotels that earn the Four Diamond Rating, according to AAA. Hilton Marco Island is just one of 1,544 hotels and 689 restaurants currently holding the rating in North America. AAA’s rating system also covers

Mexico and the Caribbean. It’s rare for an establishment to have a Four Diamond Rating streak such as Hilton
Marco Island’s. “Not many manage to get it this many years in a row,” said Doug Harper of AAA, who attended the awards ceremony along fellow AAA manager Theresa Perez. “There are very few that maintain it. Some will get it and then they’ll lose it, and get it back the next year. But consistently for 16 years, very rare.” Like Chaudhry, Perez credited the hotel’s staff with being at the heart of its success in maintaining the rating. “It shows they have a level of consistency and probably a lot of that has to do with their employees helping them achieve this award, year after year,” she said.