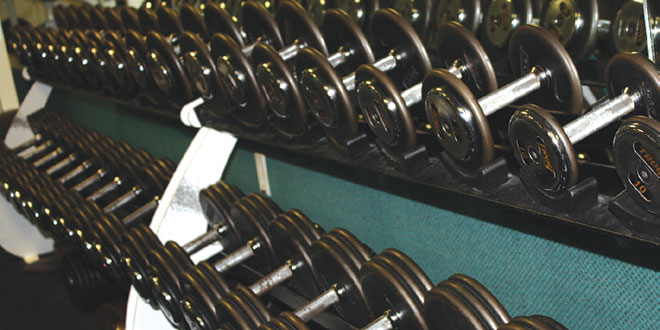 The gym in the pink building that has been on East Elkcam Circle for 32 years recently purchased Bodies by Nina in the Eagle Center Plaza on Bald Eagle Drive. The purchase means more room, more classes to offer and hopefully more members that will become a part of the Marco Fitness Club family.

In 2009, Bob and his wife purchased Marco Fitness, investing in the successful business due to their desire to live on Marco. And they have never looked back. “We’re trying to do something good here for Marco Island,” states Bob, also mentioning that their prices haven’t changed since 1999.

The club has lasted so long not only because of its affordable prices but also because of its loyal clientele. “We have a lot of characters in here,” laughs Bob. “It’s really a lot of fun.” Some 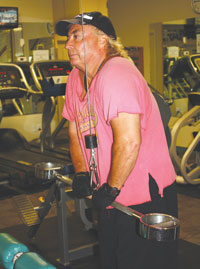 Members like Marco’s own “Johnny Angel” have been coming to Marco Fitness Club for years. Photos by Natalie Strom

of his clientele have been coming to the club since nearly as long as it’s been open.

“Bob runs a great fitness business,” states Marco Fitness Club member Jim Paddock. “He attracts nice people from all age groups; he really does.” Bob has quite a few local high schoolers that come to his gym and he has those that “aren’t quite spring chickens anymore but still want to stay fit,” he says.

Marco Fitness Club’s current space is about 4,000 square feet. After purchasing Bodies by Nina, he added 2,000 more square feet – much of which will be used for fitness classes. “We’ve really never had room for fitness classes at this location so it’s perfect because the space is just right around the corner.”

The 4,000 square foot gym offers anything from treadmills and elliptical to free weights to high end work-out machines. “They all 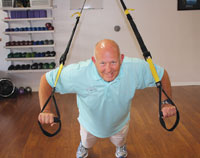 have a life span,” says Bob of the equipment. “It’s all written down and accounted for so we know when we need to replace it. That’s why all of our equipment is in such good shape.”

The 2,000 square foot new space officially opened in February but word has been slow to get out as the space was being remodeled. The space is comprised of two separate rooms, mirrored, with ballet bars and cushioned wood floors.

Currently, weekly classes are being taught which include spinning, yoga, Pilates, TRX and barre. When not in use, top of the line spinning bicycles are stored in the back of the room to make way for other classes. A top-notch Pilates machine sits in one of the rooms. The TRX class is a type of training using self-suspension. Both rooms are

fitted with wall hangings necessary for the tough TRX classes. The ballet bars were installed for the barre class which, as far as Bob knows, Marco Fitness Club “is the only place that has it (on Marco).” The class is described as an infusion of dance, ballet, Pilates and yoga.

Free weights, exercise machines, mats, straps, exercise balls and more are also in each room, making it possible for regular workouts at the new location. The setting is also perfect for personal training.

“We just want to generate a healthier Marco,” states Bob with such enthusiasm. It is evident that he loves what he does, loves his Marco Fitness Club family and loves the recent expansion. It is simply immaculate.

To learn more about Marco Fitness Club and all that it has to offer, stop by at 871 East Elkcam Circle, call at 239-394-3705 or visit its website at www.marcofitnessclub.com.