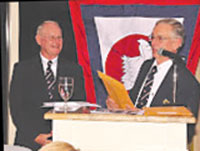 The Change of Watch ceremony is held to swear in newly elected officers and trustees and relieve the previous year’s group of command. The 2015 officers for the Marco Bay Yacht Club include Commodore Al Saunders, Vice Commodore Vern Graham and Rear Commodore Bob Boland.

Originally organized in 1968 by the Marco Island Development Corporation, the Marco Bay Yacht Club is the oldest Yacht Club on the Island. It holds many boating and social events. There are extended cruises to distant ports as well as day cruises, First Mates events, picnics, theme parties and monthly happy hour gatherings. We are an active, fun and friendly group. It is our club’s objective to encourage safe boating, the sport of yachting and to promote the skills of seamanship and navigation.

The Marco Bay Yacht Club membership is now limited to 330 people. For eligibility requirements and more information, visit the web at marcobayyachtclub.com.