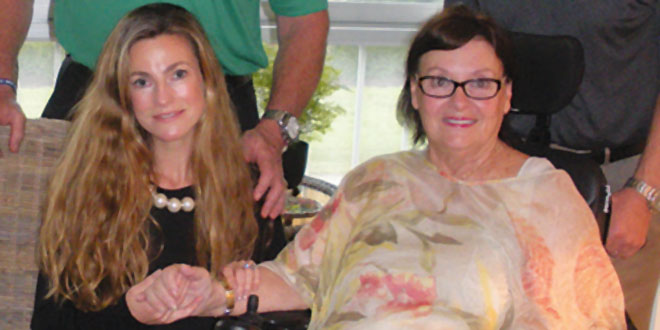 Mary Jo O’Regan refers to Cindy Amerine as a “living angel” who has blessed her life since they and their spouses formed a close friendship two years ago. So it’s no wonder that she and her husband, Michael “Moose” O’Regan, have thrown themselves into joining Amerine and her husband Dave in an effort to help eradicate a deadly disease from the planet.

A Marco Island resident, Mary Jo O’Regan is the chief organizer of “Cindy’s ALS Odyssey Walk,” a fundraiser that will benefit the ALS Association Florida Chapter. The event is set for 10 AM, February 20 and will be held at Mackle Park.

Commonly known as Lou Gehrig’s Disease, ALS, short for Amyotrophic Lateral Sclerosis, is an incurable and progressive neurodegenerative disease that affects nerve cells in the brain and the spinal cord. As the disease progresses, voluntary control of muscles is lost, eventually relegating sufferers to a wheelchair and even affecting their ability to do such things as speak, before ultimately resulting in death.

“The idea, as it is with many things, is awareness,” said Dave Amerine. “While ALS doesn’t effect a large population, it is still a devastating disease and it affects more than just the person who has it. It affects their family and their caregiver. We’re hoping that the walk Mary Jo has organized on Marco Island will work like other walks the (national) ALS Association has organized, to bring that awareness and also to possibly raise money that will go to the ALS Association.”

The O’Regans and the Amerines met at the Naples club Moose O’Regan co-owns, Paddy Murphy’s Irish Pub, located on 5th Avenue South, near the Amerine’s home. The O’Regans, natives of Ireland, perform there on weekends as a singing duo, with Moose providing accompaniment with his guitar.

“When we go to Paddy Murphy’s with all of our friends, he’ll say, ‘Here come those Lake Erie people,’ ”said Cindy Amerine, with a laugh.

She was diagnosed with the disease in November of 2014 after a roughly two-year-long battery of tests and exams. “It’s a process of elimination,” said Dave Amerine. “Most people, it takes in excess of a year before the doctors conclude that they have ALS.”

Cindy Amerine, 69, received her diagnosis in Ohio, where the couple resides part-time, just before they left for Naples, where they spend winters. As they traveled she experienced what she describes as divine inspiration to compose the lyrics to a song bearing the title “The ALS Odyssey Anthem.”

“The garden path that I once chose, became a place I could not stroll, but flowers still will grow, Alleluia,” comprises one stanza of the song and “We now anticipate the day, when ALS will go away, and all will sing his praises, Alleluia,” reads another.

Cindy Amerine enlisted the O’Regans’ assistance with the song, which was recorded last year at a local studio. Moose O’Regan wrote a melody and secured contributions from musicians around the county. Mary Jo O’Regan performed the vocals for the recording, which was produced by Ray Nesbit, of Naples, who also served as the tune’s arranger. A video of the song can be found at www.youtube.com/watch?v=4_PMmSRkcQY.

The O’Regans performed “The ALS Odyssey Anthem” three times in northern Ohio last year, including at a major ALS Association gathering held at Cleveland’s Progressive Field. They also performed it at the 2016 National ALS Registry Conference, held recently in Atlanta.

“It’s going to become the national ALS anthem,” said Cindy Amerine. “How about that? Only God could do that.”

Creative writing isn’t something she’s pursued in the past.

“It feels like a gift from God,” Cindy Amerine said of the song. “I truly feel it that it was from God to my hands. I feel I was guided to do that by Him. I don’t know why He chose me as his vehicle or why Mary Jo and Moose came into my life, or why I have such a great husband and caregiver. But it happened.”

Dave Amerine credited his wife with having an indomitable spirit that’s shown like a beacon after her diagnosis. “Obviously a lot of people have different reactions, but Cindy’s reaction was what can I do to help other people, other victims or families, and care givers and most importantly, researchers,” he added.

Mary Jo O’Regan feels blessed to have the Amerines and their family in her and her husband’s lives and to join the couple in helping to raise money for the ALS Association, which helps fund research and provide assistance to people with the disease and their families.

“I truly believe that you’ve fed my soul,” she said to the Amerine’s recently. “You’ve led me on a path that I’ve always wanted to pursue, to use my voice in a way to help others. You’ve given me the opportunity to do that and in turn, I’ve made lifelong friends whom I love and will do anything for. I’ve never been so inspired in my life, hence my organizing the walk on Marco Island.”