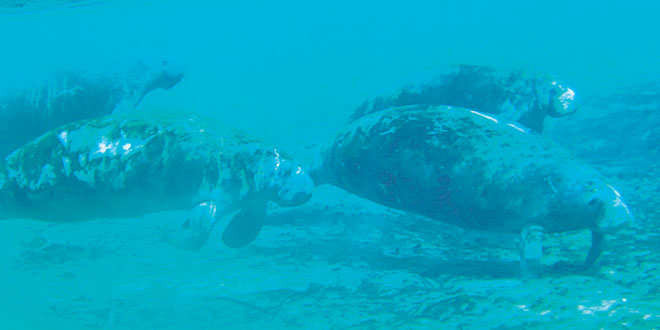 FILE PHOTOA foursome of the endangered mammals make their way to warmer waters just under the surface.

During the week of March 4th thru the 11th I was fortunate to be on the water every day. In addition to surveying our area dolphins, some other marine and bird life was very noticeable.

A few Kemp-Ridley turtles popped their heads up and some of the osprey hatchlings are now several weeks old and growing fast. Arriving from as far away as Brazil on their 10,000 mile round-trip journey, even a few Swallow Tailed Kites were seen.

The biggest surprise of all was 5 separate sightings of those lumbering aquatic giants in the Marco River area, the manatees.

Having wintered in the warmer fresh waters of the area, I saw about 30 of them in a canal north of U.S. 41 and just west of Rt. 29 a few weeks ago ) they seem to be returning to their summer homes. Information from a friend tells me that the manatees have already left the Lee County power plant area as well, a favorite place to see them during the colder months.

Of the few manatee species in the world the West Indian manatee calls Florida its home and can also be found in Central and South America. The West Indian manatee is the largest of all of these species and can weigh up to 1,300 pounds and grow to lengths of 11 feet. They are herbivores, which means that they only eat plants and they eat a lot. They will consume about 10% of their body weight in plants each day.

A major misconception about these mammals is that they are very fat, since they weigh so much. The opposite is closer to the truth. Manatees have very little body fat, a reason that they disappear from our canals and rivers for several months during the winter. It is nearly impossible for them to survive in water temperatures below 60 degrees so they head for the warmer fresh water areas not too far from here. These waters provide a fairly consistent temp for them. Without that body fat they are subject to hypothermia and other cold related diseases.

a huge bone structure and large intestines that account for much of their body mass. They spend most of their time eating as well as resting or traveling. Since seagrass beds and water vegetation are favorite foods we will find them primarily in shallow rivers, canals, coastal areas, saltwater bays and estuaries.

As with most large mammals, manatees have a low reproductive rate. Both males and females become mature enough to reproduce in the 5 to 9 years of age range. One calf is usually born every 2 to 5 years. Since they are mammals, this would be a live birth and the infant will feed from mother’s milk. These newborn will weigh approximately 40 pounds and stay with mom for several years. The gestation period is around 13 months.

One of the most unique features of these “sea cows” is their teeth. They have 6 to 8 flat molars on each side of the upper and lower jaws for a total of 24 to 32 teeth. Since they continually chew for 7 to 10 hours per day these molars become worn by sand and grit very quickly. To compensate for this, the manatees are constantly producing new teeth. They are called “marching molars”. New teeth develop at the rear of the jaw and “march” forward at a very slow rate as the older, worn teeth fall out. This process also occurs in kangaroos and elephants.

Although we find them in the saltwater or brackish (mixture of salt and fresh water) areas during most of the year, they do not drink salt water. Their intake of water occurs while eating aquatic plants. Otherwise they must return to fresh water to drink but only once every week or two.

So keep an eye on our river and canals as well as the shoreline. You may be lucky enough to see that snout come up for a quick breath, but look quickly. That one intake of air can sustain them for as long as 15 minutes.

Bob is the owner of Stepping Stone Ecotours and a naturalist on board the Dolphin Explorer. Bob loves his wife very much!