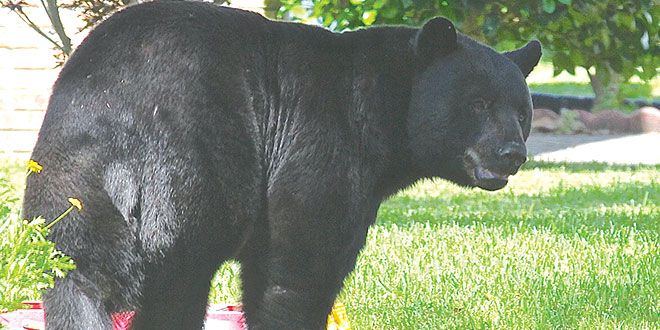 Most Southwest Floridians are well aware of the wide variety of wildlife that lives amongst them. Alligators, panthers and manatees, oh my! Not to mention, the vast array of lizards, birds, squirrels, bob cats and raccoons scurrying on land and the wide assortment of fish swimming under water.

The largest of the furry creatures — the Florida Black Bear — has been the focus of the Florida Fish and Wildlife Conservation Commission (FWC) for the last month. The FWC launched its new Florida Black Bear Management Plan, introducing Southwest Floridians to it through three public workshops. Approved in 2012, the plan creates seven bear management units (BMUs) throughout the state.

According to FWC officials, the BMU approach will allow them to manage bears based on the characteristics of bears, people and habitat in different parts of Florida. The first steps are being taken to create the South BMU to manage the bear subpopulation in the Big Cypress National Preserve and surrounding areas.

The idea for the two-year, $500,000 plan was sparked by growing encounters between humans and a continually expanding Black Bear population. Black bears are generally not aggressive, but approaching them can make them defensive. Adult males typically weigh 250 to 400 pounds and can be as large as 600 pounds. Extra caution is appropriate when a mother bear and her cubs are sighted.

Bear-related calls to the FWC increased from about 1,000 in 2001 to more than 6,700 in 2013 — the most ever recorded — with most people reporting bears in their yards or getting into garbage. Then there are the roadway encounters. It is not uncommon to spot a bear peeking through the scrub along Collier Boulevard while driving into Marco, and last year, 232 bears were killed by vehicles throughout Florida. In May, a mother and cub were killed after darting into traffic on I-75 in Naples.

The goal of the Florida Black Bear Management Plan is to educate the public and keep both people and bears safe. FWC officials recommend the following tips to remain safe Black Bears and to reinforce their natural fear of people:

• Never approach or surprise a bear. Keep as much distance between you and the bear as possible.

• If a bear changes its behavior because of your presence, you are too close.

• When walking dogs, keep them close and be aware of your surroundings. Dogs can trigger defensive behaviors from bears.

• Report any bear threatening the safety of humans, pets or livestock, or causing property damage to the 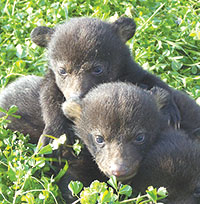 • If you encounter a bear at close range, remain standing upright with arms raised, back up slowly and speak to the bear in a calm, assertive voice.

• Carry bear spray and learn how to use it properly, factoring in wind direction, distance to bear (20-30 ft.) and your escape route. Make sure you buy one that is specific for use on bears.

• Do not turn your back, play dead or run from a Black Bear. Back away slowly into a secure area such as a house, car or building.

• Make sure you are in a secure area and the bear has a clear escape route, then yell loudly, bang pots and pans, blow a whistle, or use an air horn or car horn to scare the bear away.

• Install a motion-activated device, such as flood lights, a water sprinkler like the Water Scarecrow or audio alarm like the Critter Gitter, to scare a bear away from a location when you are not present.

To minimize human-bear encounters it is important to keep these known bear attractants under wraps and secured: unsecured trash and recycling containers; bird and squirrel feeders with items like seed, suet and peanuts; wildlife feeders; pet food and bowls; barbecue grills and smokers; pets and small livestock, such as chickens, goats, pigs and rabbits; livestock feed like corn and grain; compost piles; beehives; fruit and nut-bearing trees and shrubs; and outdoor freezers, refrigerators or coolers.

Go to MyFWC.com/Bear and look for “Which BMU are you?” to find out more about black bears in the South BMU. “A guide to living in bear country” is also available at MyFWC.com/Bear by clicking on “Brochures and Other Materials,” and you can find more on bears and the bear management plan at MyFWC.com/Bear.

• Black bears are the only species of bear in Florida and once roamed the entire state.

• Florida bears generally have black fur with a brown muzzle and sometimes a white chest patch called a blaze.

• Adult black bears typically weigh between 150 to 400 pounds, with males often twice the size of females.

• Female bears have their first litter at about 3 1/2 years old and usually have one to three cubs every other year.

• Bears have the best sense of smell of any land mammal, seven times better than a bloodhound.

• 80 percent of a black bear’s diet comes from plants such as fruits, nuts and berries, 15 percent from insects (termites, ants and bees), and 5 percent from meat, such as opossums, armadillos and carrion.