“Make Stuff Up!” with WOW Improv 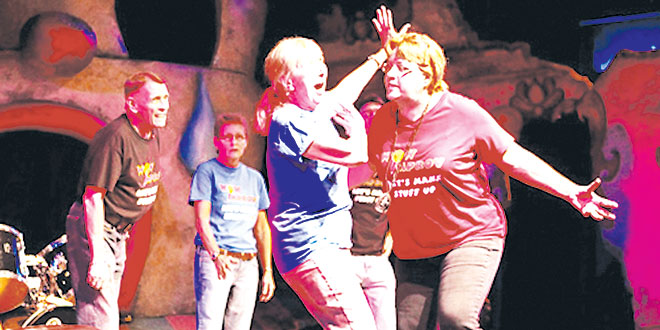 Let’s Make Stuff Up, explains the spontaneity and fun you’ll have with an evening of comedy with WOW Improv of southwest Florida. Improv comedy is a form of live theater in which the plot, characters and dialogue are made up in the moment. WOW Improv practices short-form improvisational comedy where the improvisers use suggestions from the audience and act out scenes and theater games. If you enjoyed “Whose Line Is It Anyway?” you’ll love WOW Improv!

Many of the current rules of comedic improv were first formalized in Chicago in the late 1950s and early 1960s at The Second City where improvisers were trained in improv rules which became the cornerstone of modern improv training. Many of the original cast of Saturday Night Live came from The Second City and the franchise has produced comedy stars such as Mike Myers, Tina Fey, Dan Aykroyd and John Belushi.

“This show will be enjoyed by teens as well as adults and is absolutely family-friendly,” says Beverly Dahlstrom, Artistic Director. “In fact, improv encourages the audience to offer suggestions, be creative and “be” in the moment by playing off of each other. Improv is fun and encourages people to develop openness, spontaneity, and teamwork skills.”