Lunch with the Chief 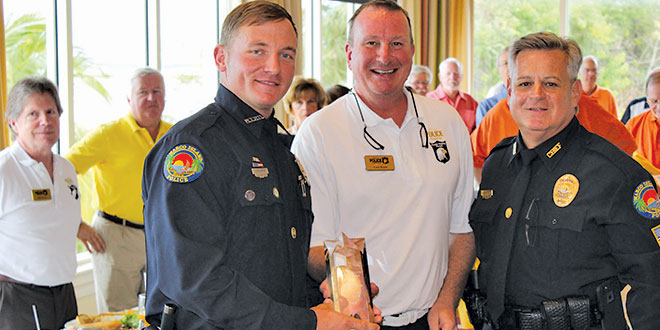 Josh Ferris had no idea that he was going to be front and center at the recent Lunch with the Chief sponsored by the Marco Island Police Foundation.

But Ferris was indeed in the spotlight, having been named the organization’s Policeman of the Year for 2015 at the event, held at the Hideaway Beach Club.

In announcing the selection, Marco Police Chief Al Schettino said the process is always a difficult one because of his staff’s dedication and hard work. He said Ferris has been with the department since 2012, is working towards a bachelors degree at Barry University and was one of three organizers of the fundraiser, held last August, for Marco resident Amy Ashby, who is fighting cancer. She is the clinic manager at the Physician’s Regional walk-in clinic on Marco and the wife of Marco police officer Paul Ashby.

Schettino also pointed out that Ferris, a member of the city’s marine patrol, is known for entertaining his colleagues with his Elvis impressions.

“I couldn’t do what I do without my fellow officers,” said Ferris, a Florida native, in accepting the award.

After the luncheon, Ferris said he was shocked to hear his name called. “I had no idea they were going to honor me with this,” he added. “I love working here on Marco and with everyone who works for the police department.”

The luncheon’s guest speaker was Lt. Col. (U.S. Army retired) Tom DiTomasso, owner and instructor for North Carolina-based D-Co Leaders and Training, which has been training staff from the Collier County Sheriff’s Office, and the Marco and Naples police departments in terrorism protection strategies.

A 20-year Army veteran, DiTomasso earned the Silver Star and Purple Heart as a Task Force Ranger in Mogadishu, Somalia in 1993, with some of his exploits depicted in the movie “Black Hawk Down.” He was assigned to the Army’s Special Operations Command at Fort Bragg in 1998 and has made multiple combat deployments to Somalia, Bosnia, Afghanistan and Iraq. His last assignment saw DiTomasso serve as a Joint Special Operations Task Force Commander in Iraq, overseeing more than 1,200 special operations forces and government agency personnel.

He told the audience 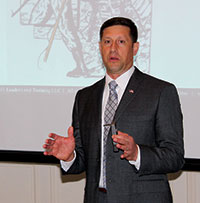 that it’s an unfortunate reality that in today’s world, international terrorist organizations are everywhere. “We can’t wish that fact away,” said DiTomasso. “It’s a problem that’s not going away.”

He said terrorists are learning about America “real time” thanks to the Web and that some of their intercepted internet discussions have mentioned creating a major event, and then waiting for the first responders to arrive before attacking.

“The worst-case scenario is an organized, coordinated attack from several people who are ready, willing and able to attack our communities,” said DiTomasso.

That’s why making sure that local fire, law enforcement and Emergency Medical Services personnel are up to date in their training and equipment are of vital importance, he added. “You have to be prepared for the worst case scenario.”

After the luncheon, DiTomasso credited the Sheriff’s Office, and the Marco and Naples police departments with having “embraced very progressive training.”

“They want to be ready for the worst case scenario,” he added. “They know there are a lot of families here. It’s a high priority area. It’s a target area. It could be catastrophic because there are so many people here on vacation and there are a lot resorts, so we want fire, law and EMS to have a plan should the worst case scenario happen.” Practice and prior planning are the key points. If you train for scenarios, we can practice our tactics, techniques and procedures to make sure they’re the most efficient they can be, and stop the loss of life and property.”

DiTomasso’s message hit home, from a national perspective, for Diane Niermeyer of Marco. “I think he said we need to get ready for bad things to happen, and we’re not, and I think we need a leader that will help our military get the job done and not go to sleep at night when we’re being attacked,” she said.

Jack Patterson of Marco said he’s happy to know that America’s military is populated by people such as DiTomasso. “It gives you a comforting feeling knowing that those kind of people exist today,” he added. “Unfortunately the politics of our country is not allowing them to do what they should do.”