Lunch with the Chief’

The new president of the Marco Island Police Foundation, Curt Koon, along with incoming board members, were sworn in Tuesday, Jan. 20, by Marco Island City Council Chairman Larry Sacher at the foundation’s first luncheon of the year at Hideaway Beach. Koon and his wife, Jackie, are eight-year residents of Marco Island and owners of CJ’s on the Bay at the Esplanade.

Attendees also gave a standing ovation to Marco Island Police Chief Al Schettino, who has assumed the official title of “police chief” after being the “acting” chief since July 25. Since his hiring, the department is now fully-staffed with 34 sworn-officers and

has undergone a makeover to improve efficiency and operational effectiveness.

Guest speaker at the luncheon, Marco Island resident and former Secret Service agent and trainer Dave Gallo, gave Schettino kudos as well, claiming it was his invitation that prompted him to come and speak. “I highly support your new chief, and I am supporting how he is policing this community.”

Gallo shared a short vignette on how a Marco Island police officer recently knocked on his door and offered advice on how to improve security at his home, not knowing his background in the Secret Service and national security. He said the officer was “very professional” and

took a good ribbing from Gallo and his buddies that day. Gallo noted that it’s not every community that has policemen knocking on your door to offer advice!

“The (US) government is on top of these crimes,” Gallo said. In fact, Identification theft comprises only three percent of cyber-crime in America. He also noted that the Secret Service is also on the alert and was the initial government organization to alert retail giants Target and Home Depot that their security had 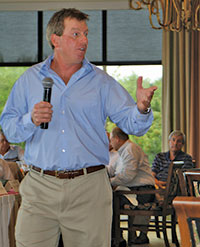 David Gallo talks cyber crime, identity theft and how to protect yourself from them. PHOTOS BY PAT NEWMAN

Gallo, dressed casually in an open-neck shirt and slacks, strolled among the lunch crowd, microphone in hand, offering tips and answering questions. He talked some about participation in social media platforms such as Facebook, warning users not to announce, “We’re headed to the Bahamas for a two-week vacation!”

In regard to credit cards, Gallo suggested carrying only one and monitoring its activity daily. If you are destroying a card, “cut it up and put the pieces in different garbage bags” to prevent “pickers” from piecing together information. 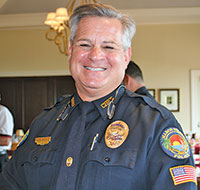 It’s official! Al Schettino is now the police chief for the MIPD.

making a personal contact within a charity you wish to support to avoid problems.

Finally, if you answer your phone from a so-called associate of your bank and the caller requests “sound weird, it probably is weird…Hang up!”

The Marco Island Foundation is accepting new members. The organization provides services to the police department’s officers and the community, including the neighborhood watch program and assistance with crowd and traffic control during major events on Marco Island.

The foundation assists officers and employees of the Marco Island Police Department in emergency financial situations and maintains a scholarship fund for officers and their children. Founded in 2001, the non-profit foundation currently has approximately 186 members.