Love of the Y Tournament 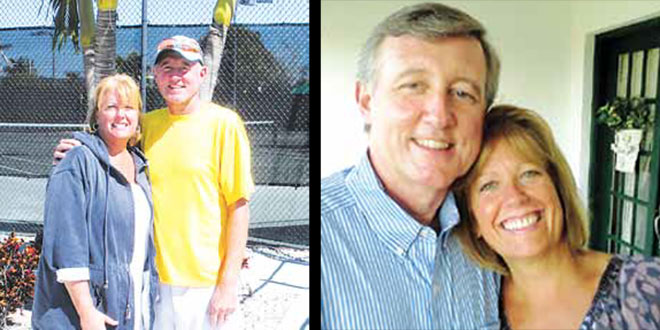 Sam and Karen Lewis had a hunch about Larry and Mary Fischer that turned out to be as right as right can be.

They helped bring about the Fischers’ initial meeting a few years ago. It was an encounter that quickly flourished and became a love match, thanks to the Lewises and the event around which the entire story revolves – Greater Marco Family YMCA’s “Love of the Y” tennis tournament.

“Love of the Y” was held over Valentine’s Day weekend, Feb. 13-15 this year, at the Y’s Sandhill Street tennis courts.

The tourney’s title refers to the services provided by the YMCA and the camaraderie they foster, said Larry Fischer, in between matches this year. “At the same time, it has another meeting for us because if not for the Y, we wouldn’t have had that moment on the veranda and fallen in love,” he added.

Larry and Mary Fischer met for the first time at “Love of the Y” in 2012. By the time the tournament rolled around in 2013, romance had blossomed and they married in November of that year.

“That’s what’s so great about this tournament,” said Mary Fischer. “You look around and you’ve got husbands and wives playing. You’ve got friends playing. You’ve got a father out there playing with his son. It’s a great tournament and tennis has been great for us. For a relationship, it’s great socially. He’s (her husband) here because of tennis and we met because of tennis and the Love of the Y.”

Theirs is a connection that was a few years in the making and one that might not have occurred were it not for a decision to throw caution to the wind.

Dayton, Ohio was home for Larry Fischer when the avid tennis player first traveled to the island in 2009 for the tournament, at the invitation of his friends and fellow tennis lovers, longtime Marco residents Sam and Karen Lewis.

As it turned out, the Lewises were also friends with Mary Fischer and they tried, unsuccessfully, to pair them in mixed doubles. She had already agreed to be another player’s partner, a circumstance that also arose in 2010, when Larry Fischer again made a tennis pilgrimage to Marco.

The duo had yet to meet by 2011, when the Lewises again set them up to play mixed doubles in Love of the Y. But rain storms delayed play for one week and Larry Fischer’s responsibilities in Dayton prevented him from making the Thursday through Sunday trip to Marco two weekends in a row.

It seemed that 2012 was to be another year in which there would be no meeting. However, Larry Fischer decided to seize the moment on the tournament’s final day.

“I was supposed to play with her, but someone else had paired up with her,” said Larry Fischer. “I was watching her. She was a good player, attractive and I’d heard by all accounts, just a really neat person.”

With a Monday morning flight back to Ohio facing him, he decided to take matters into in his own hands and introduce himself. “I said to myself, ‘I have to meet her because I’m only here for one more day and I’m out of here, and it’ll be another year and life’s too short to waste,’ ” said Larry Fischer.

He decided the moment called for something memorable, a question unlike any another man might ask.

With that, a conversation began that included their agreeing to be partners in the 2013 tournament.

They began corresponding by email that following week and grew close over the next month. Larry Fischer then returned to Marco to visit with the object of his affection.

“It confirmed my suspicions that she was someone very special and our relationship just kind of took off from there,” he said. “We had a lot in common. Eventually, I moved down here in September of 2012.”

The couple had discussed marriage and Larry Fischer popped the question on Nov. 2, 2012, during a sunset stroll along the beach. Nuptials took place on the same date, one year later, with Lisa Fischer’s then 92 year-old father, the late Raymond Ellmer, walking her down the aisle.

“We were really lucky to have found each other at this time in our lives where everything worked,” said Mary Fischer. “It just all fell into place.”

The “Love of the Y’s” 2015 edition was extra special for the Fischers, who captured one of the tourney’s mixed-doubles championships.

It came as no surprise to the Lewises that the Fischers relationship blossomed once they finally met.

“We knew those two were meant to be,” said Karen Lewis. “Those two are the best two that ever have been. They’re extremely happy and they deserve to be together.”