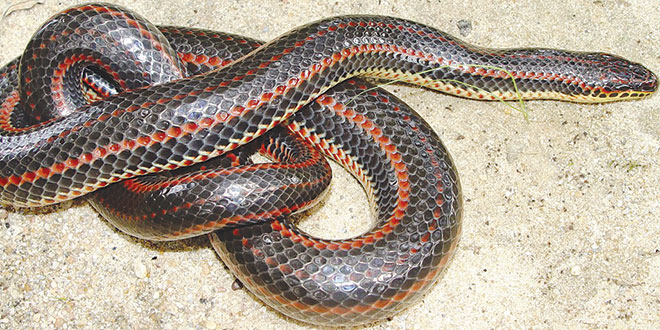 Recently I submitted a column concerning the loss of many species around the planet and the idea, by some scientists, that we are experiencing the beginning of the next mass extinction. Several readers responded and asked that I address the loss of some Florida species, rather than just a generalization of global statistics. (This is good that I get such feedback, now I know someone other than my wife reads these articles.)

Human expansion seems to be the main concern regarding some Florida animals, but climate change also plays a major part in the migratory habits as well.

Let’s look at a few creatures in our state…

Rainbow Snake…the South Florida rainbow snake was only found in one area of Florida, that being Fish Eating Creek. This creek flows into Lake Okeechobee, an area of farm and plant development for many decades now. The snake was beautiful; iridescent blue-black with red stripes on its sides and back. In the early 1900’s this reptile was revered for its coloration and seen often in the area. It was declared extinct in 2010, with no confirmed sightings since 1952.

Shrimp – The Florida Fairy Shrimp…smaller than a quarter, this magically named shrimp lived in a sole freshwater location just south of Gainesville. Not subject to the flowing of a river or stream, the pool that the fairy shrimp called home was bulldozed for development. No sightings have been recorded elsewhere since that time.

Honey bee…not yet extinct, but there’s a lot of buzz about this insect. 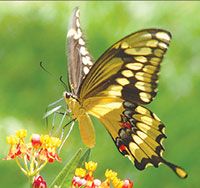 Although they are found in Florida, I’m going to look at this on a global scale. Countries around the world are seeing bee population decrease by 20% or more each year and this alarming rate has been taking place for the last 10 years.

Here in the U.S., berries, pears, apples and many other fruits and vegetables are pollinated by honey bees. In fact, up to 33% of our food items are on our tables because of these bees.

Albert Einstein once said that if the honey bee disappears from the Earth, humans would perish just a few years later.

Snail kite…still around, but for how long? This most endangered raptor is found right here in the Everglades.

Their beak is shaped to do one thing – remove snails from their shells. Apple snail populations have diminished with the draining of several lakes. These snails frequent the hydrilla plant, and boaters are asking permission to remove the hydrilla because of motor entanglements. If the snail habitat is gone, then the snail is gone as well. If the snail is gone and the kite is built for this food source, then the kite must adapt quickly, or it too could be gone.

There are millions of species on our planet, and the past extinction rate may have been one or two per million each year. I’ve just named five that are gone in the last fifty years right here in Florida, with many more critically endangered.

At some point we may understand better that there is a balance in nature, and we are drastically tipping the scales! It seems that we may be the primary invasive species.

Bob is a naturalist for the dolphin survey team onboard the Dolphin Explorer. He is a member of Florida SEE (Society for Ethical Ecotourism). Bob loves his wife very much!