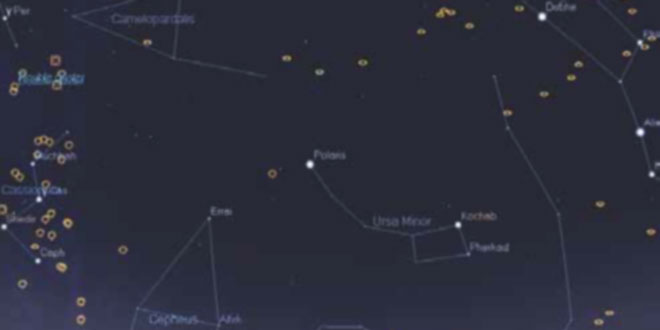 Looking Northeast, 9:00PM Mar 20. How many stars can you see in the bowl of the Little Dipper? SUBMITTED PHOTO

Last issue we mentioned the Big Dipper was once again visible during the evenings here in Southwest Florida. As we but seldom look northwards during these articles it is time we examine the northern sky more carefully.

The second star on the handle of the Big Dipper is called Mizar – said to be a test for vision since ancient times. Very close to Mizar is a faint star called Alcor; if you can spot it your vision is supposed to be excellent. Try in a couple of hours when Mizar is higher in the sky. When I was a boy I could see Alcor without trouble, now I need binoculars! In recent years there has been some debate if Mizar and Alcor are physically associated with one another or merely lie along the same line of sight. The balance of the evidence favors Alcor and Mizar orbit each other.

Not too far away from the Big Dipper is its fainter sibling, the Little Dipper or Ursa Minor – the little bear. In suburban skies around Marco you can probably only see three stars in the Dipper, Polaris and the two stars at the far end of the bowl; these two stars have been called “the Guardians of the Pole”. The brighter of the two, Kocab, was our pole star from about 1500 BC to 500 AD. At no point in time however was Kocab as close to the north celestial pole than Polaris is today.

The four stars making up the bowl of the Little Dipper are rather interesting as they are of the second, third, fourth and fifth magnitudes. Stargazers can use them to judge the Limiting Magnitude of the sky, meaning the magnitude of faintest star visible given the current sky conditions.

Besides being our pole star, Polaris also is a rather fascinating star called a Cepheid variable. These stars fluctuate in brightness with great regularity and the period is closely related to the stars intrinsic luminosity. Astronomers can use them as “standard candles” for measuring distance from Earth. The brightness of Polaris varies plus or minus 8% over four days. Additionally Polaris seems to be slowly increasing its average magnitude; it’s 15% brighter than it was a century ago and about 2.5 times brighter than it was in Roman times.

Despite popular opinion, Polaris is not exactly at the north celestial pole; it’s about 0.7 degrees away from it, or somewhat more than the width of the full Moon. Polaris is still closing the gap however and in the year 2100 it will reach its closest point to the pole and be less than 0.5 degrees away from it.

Mr. Usher is a director of the Everglades Astronomical Society which meets the second Tuesday each month at 7:00PM in the Norris Center, Cambier Park, Naples.