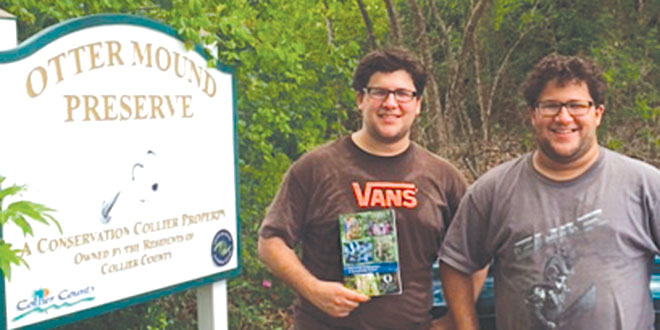 A small oasis — 2.45 acres in total — holds archaeological, historical, cultural and biological importance for the history of Marco Island. It is the Otter Mound Preserve.

Located in the southern area of the island at 1831 Addison Court, the “mound” that this preserve references is a relatively small part of a 70-80 acre Indian mound built by the Calusa Indians, estimated between 750 and 1,200 A.D. In more recent history — the early 1900s — it was the site of Caxambas Village, the Marco Island settlement for the clamming industry. It was a bustling community that was owned by Charles and Tommie Barfield until about 1919. Then, the Griner family sold it to Ernest and Gladys Otter who lived on the site until 1977.

This property was purchased in 2004 by Collier County Government’s Conservation Collier funds. Conservation Collier was an initiative for the use of public funds to purchase and manage lands in perpetuity that have diverse and rare habitats, protected wildlife and historical and archaeological importance. Otter Mound, not named for the animal, but for the pioneer by the name of Ernest Otter, is managed by Collier County Government as a preserve, not disturbing the historical features and letting 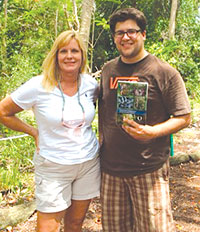 A primitive pathway can be followed easily with signage telling the story of the site. As one meanders along the pathway, it is interesting to view the Florida Whelk shell walls that were built by Mr. Otter in mid-1900s to terrace the property for farming. Curiously, there also is some of the structure and bricks left of an outhouse. There are more than 100 species of native plants on this site as well as abundant bird species documented throughout the seasons. A bobcat has been observed enjoying the cool shade of this site on several occasions. Several species of snakes, too, are known to slither and sun on the pathways. It is a quiet escape for all to visit and enjoy.

Recently, a young resident of Marco Island and current student at Florida Gulf Coast University, Vincent Giannone, generously proposed a volunteer service project to meet a course requirement and also to give back to his community. Giannone, 24 years old and always academically excelling, was involved in many hours of volunteering for the community through his youthful years at Tommie Barfield Elementary, Marco Island Charter Middle School and Lely High School. He also achieved the accomplishment of Boy Scout Eagle Scout. 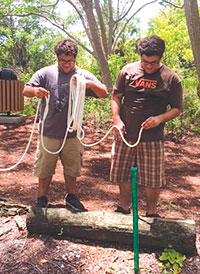 He now is pursuing a computer engineering degree, and with recruiters already seeking him out, he hopes to be employed by Google in the near future.

Contributing about 30 hours of hard labor, Giannone removed several truck loads of debris left on the site from previous clean up and invasive vegetation removal activities. He also donated and added 18 posts and rope to finish the pathway railing system. His initiative was well received by Conservation Collier management as staffing is limited, and ownership of this preserve by the community is one of the goals. Giannone stated, “I wanted to do a project in my community to improve a place that I love. Otter Mound fit that description, and I was happy to do the work.”

If you haven’t yet ventured to Otter Mound Preserve, take a short drive to 1831 Addison Court. Walk the pathway; take a moment to sit on one of the benches along the pathway; listen to the breeze move through the trees and birds chatter under one of the last undeveloped hardwood tropical hammock habitats in Southwest Florida.