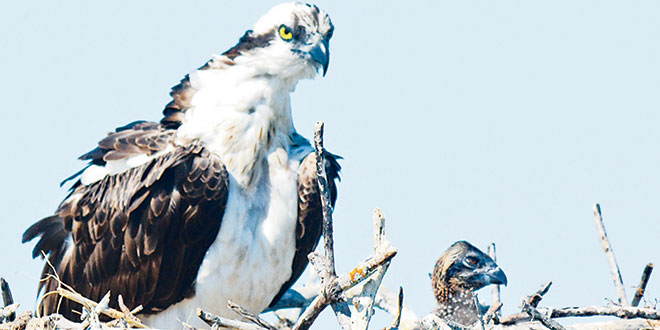 One of the first Osprey hatchlings made its debut in mid February, 2015.

Join Bob On March 9th At The Rose History Auditorium As He Presents “Rock My World: How The Earth’s Movements Effect Migration”. The Program Begins At 7 Pm And Is Open To The Public. Call 389-6447 For Seating Information.

Their distinctive call is unlike any other bird in our area. With a pitch that seems to accelerate with each note, our eyes are drawn to the sky, drawn to view one of nature’s best hunters, the Osprey.

These prolific raptors can be seen around Marco Island all year long. But, at this time of the year, they seem to be more active for one main reason: the new nestlings (hatchlings) are arriving.

Here in South Florida the Ospreys usually begin rebuilding their nests in the last months of the year. I say “rebuilding” because most of these birds of prey return to the exact same location each year. The female will lay two to four eggs within a month period and relies on the size of the nest to conserve heat. Eggs are incubated for about five weeks until hatching and both the male and the female will take turns tending to this duty.

Not all of the young will survive. Since the birth of each individual is staggered over a short period, it is usually the first chicks to hatch that make it. Continually fed by the parents, the young will develop and are ready for flight in about ten weeks.

Prior to mating an adult male will court an adult female by bringing her fish. ( I tried this when I was young and single…never worked for me). Once they have accepted each other they will stay together for life.

With the exception of Antarctica, the Osprey is unusual in that it can be found nearly worldwide. Anywhere that a river, stream, lake, canal or coastal region can be found, there is a possibility 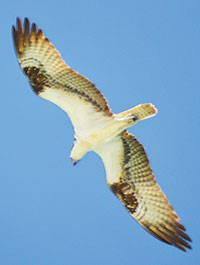 This adult searches the Marco River for its next meal.

that this hunter may be present.

Their diet consists almost exclusively of fish. Subsequently, they have received the nicknames of “fish hawk” or “sea hawk”. They possess some very special physical characteristics to assist in both hunting and catching prey. They have vision that has adapted to detect underwater prey while in flight. At an altitude of thirty to one hundred feet, the Osprey will locate its catch, hover momentarily, and then plunge feet first into the water.

While most raptors have three toes in front and one at the rear of the foot, the ospreys have a toe that is reversible, allowing them to grasp their prey with two toes in front and two behind (the owl is the only other raptor that can do this). The osprey can now rotate its catch in line with its torso, producing less wind resistance and easier flight while transporting its meal. Sharp spicules on the underside of the toes and scales that face backwards on the talons (claws) help hold slippery fish much better. Nostrils that close will help keep out water during the dive into the water.

So are all Ospreys “local”, like most of ours, or do they migrate? It is well documented that these birds located north of latitude 29 degrees, around Ocala, Fl, routinely migrate to Central and/or South America. Some of them between Punta Gorda and Ocala also migrate. The non-migratory areas of resident Ospreys have been studied extensively in Florida Bay, the southern Everglades and the Florida Keys. So what about Marco Island birds?

My personal observations indicate that many, if not all, remain here year round. Once the young Ospreys have fledged (taken flight) the nests appear to be empty but the adults are often seen in the trees not too far from these nests. Further studies utilizing lightweight satellite transmitters and identification tags will hopefully shed more light on 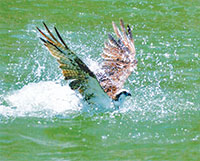 The Osprey lands feet first in the water to catch fish. photop by Bob McConville

Regarding the Ospreys that do migrate, some of them will log nearly 150,000 miles during their lifespan. One tagged bird flew 2,700 miles from Martha’s Vineyard, MA to French Guiana, South America in just 13 days!

Although they are not a threatened species at this time, there have been dangerous times for them in the past and they do face some obstacles at this time. Years ago pesticides such as DDT affected the calcium metabolism of this predator, causing the egg shells to be so soft that the egg could not be incubated. Currently there are concerns about mercury levels in some waterways and the negative aspect as the birds feed on fish in these waters.

As do most animals on the planet, the Osprey does have a predator or two to worry about. In our region, both the bald eagle and the great horned owl have been known to attack the sea hawk. These two birds of prey do not just go after the young, but they will also pursue the adults as well.

Many bald eagles will track Ospreys for another reason. Once the Osprey has caught a fish, the eagle will swoop down in an attack position. To defend itself, the smaller hawk will drop its catch and prepare for a fight. The always opportunistic eagle will simply fly below to grab a free meal.

So keep an eye on the sky and your ears open for that distinctive call. Ospreys are everywhere around Marco Island. If you are fortunate to get close enough to a nest, look for that tiny head peering over the edge. Maybe you will see some of the new chicks that will be taking flight in a very few months.

Bob is the owner of Stepping Stone Ecotours and naturalist on board the Dolphin Explorer. He is a member of Florida SEE (Society for Ethical Ecotourism) and Bob loves his wife very much!