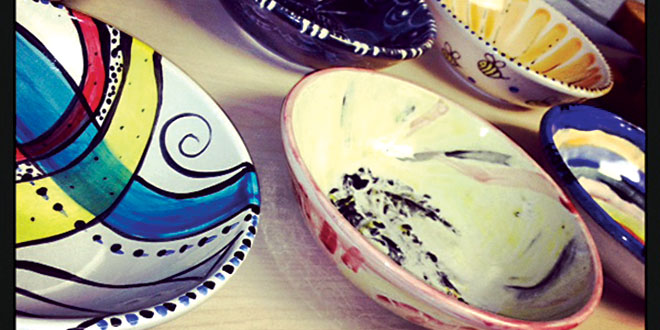 A sampling of the artist made bowls auctioned during the 2014 Souper Bowl-Marco Island event.

Eight local artists are letting their creative juices flow for Souper Bowl-Marco Island 2015. Each artist has designed and painted his or own soup bowl for the event’s silent auction, fashioning one-of-a-kind pottery to raise money for the Leadership Marco Scholarship Fund.

Now in its third year, Souper Bowl-Marco Island has raised more than to $26,000 during it first two events through the sale of more than 1,800 soup bowls. Thanks for the Marco Island Chamber of Commerce-sponsored event, seven scholarships were awarded last year. This year’s event will be held on Saturday, Jan. 31 — the eve of the National Football League’s Super Bowl Game — from 11 AM-1 PM at Mackle Park. A bowl pre-sale event only for parents of students who created a bowl is scheduled for Friday, Jan. 30.

According to Jada Shigley, co-chair of Souper Bowl-Marco Island, the auction of artists’ creations raised roughly $1,100. “We are fortunate to have several return artists that participate each year,” she says. “It’s fun to see the artists creations at all levels, and we are honored to have our local artists donate their time and participation. It’s a celebration of art and education! And don’t forget the soups!” 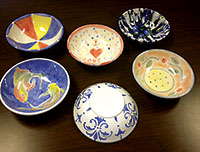 Local artists provide a unique perspective when creating their bowls for auction.

Betty Newman, Tara O’Neill, Bruce Robertson, Karen Swanker and Malenda Trick. Each artist’s participation and ultimate creation is deeply personal in nature, and Coastal Breeze News spoke with them about their lives, their artistic passion and the importance of being a part of Souper Bowl-Marco Island.

As a retired public educator from Ohio, Carolyn Burger has a special interest in working with Souper Bowl-Marco Island. “As a child living in a small town in northeast Ohio, I only had art classes up to the sixth grade. After that, I never had an opportunity to take an art class until I was in college studying to be an elementary teacher, and then the classes were about how to teach art to children,” she explains.

“How I wish that I had that opportunity to take art classes in high school,” Burger adds. “Perhaps I would have decided to major in art or to be an art teacher. It was only after I retired from public education as a school principal that I began taking painting classes and found it to be so much fun to do.”

She has painted a bowl of Souper Bowl-Marco Island since its inception. “It was something that I never tried before, and it was fun doing something different. My 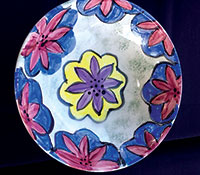 A bowl of flowers

bowl this year has a large sun with a moon in the center of the bowl,” Burger notes.

Today, she is known for painting Florida scenes highlighting the beauty of the Sunshine State through her artistic interpretations of the sky, the water, the vegetation and the wildlife. She works in the mediums of oils, acrylics, watercolor and pen and ink. She is an active member of Marco Island’s Center for the Arts, the Marco Island Foundation for the Arts and the United Arts Council of Collier County.

Visitors can see her work in her Marco Island home studio at 282 Sand Hill Street. For more information, see her website and blog at www.carolynburger.com.

Painter Judy Harthorn has become a regular at various Marco Island artistic events, especially those sponsored by the Chamber. In fact, she has participated in “Wet Paint Live” for the last four years. She also has painted with Marco Island Outdoor Artists. Now, the Michigan native is creating a bowl for Souper Bowl-Marco Island as well.

Lee Horton is an artist of many mediums. He paints with watercolors, creates metal-plate etchings and works with mixed-media projects, incorporating graphic design, photos and videography into his materpieces. He also once worked as a Hallmark® and American Greetings® Card artist. 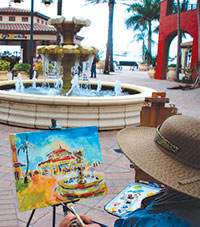 participated in the “Bras for Life” fundraiser for the American Cancer Society on Marco Island and the Marco Island Center for the Arts. Proceeds benefited breast cancer patients locally, as well as the arts on Marco. He also has participated the Chamber’s annual “Wet Paint Live” event for the last few years.

Today, Horton is the principle photographer/owner of Lee Horton Photography, and has created a bowl for this year’s Souper Bowl-Marco Island event.

Betty Newman has been living and painting on Marco Island since 1993. She is the co-owner of The Artist’s Gallery at The Esplanade.

It comes as no surprise that she creates a bowl Souper Bowl-Marco Island, as her love affair with art began when she was a child in Chicago. She delighted in bright colors and textures, especially as they reacted to other colors and light. Her crayons — and later acrylics and oils — took her on wild rides of fantasy and offered temporary freedom from loneliness.“Art is important for children,” Newman says. “It helps them think creatively. Discover talents they don’t know they have. It helps in communication.”

As an adult, her absorption in bold, exotic color and texture still provides joyful escape from the challenges and responsibilities of everyday life. She takes 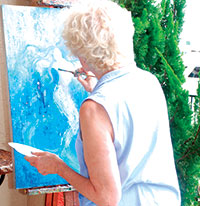 Betty Newman paints a ‘whimsical mermaid’ at The Esplanade.

inspiration from the sun, sea and subtropical flora of the islands.

“An archaeologist may uncover treasures by removing layers of earth,” she explains. “I create treasures by adding layer upon layer of color and texture, using trowels, brushes and my hands. Oil moves seductively about the canvas. Acrylics demand to dry now! Watercolors, stubborn at times, yield if you quench their thirst. I love working with foils, leafing and metallics. Sometimes the different mediums crash and buckle; other times they blend and settle together like old friends. Each painting in progress has a heart and soul of its own.”

For more information, check out www.bettynewmanart.com.

Goodland artist Tara O’Neill is participating in her third Souper Bowl-Marco Island this year. This year, she has called her creation “Beach in the Round,” as it incorporates sand, sea, sky and beach umbrellas.

“I love this event as it truly pulls the whole community together in one form or another,” she notes.

Education and the role of art in it is a topic near and dear to O’Neill, who can never remember a time in her life when she did not want to be an artist. She even has taught classes at the Marco Island Center for the Arts, and she believes the Souper Bowl event is the

perfect example of education and art working in concert. “When you expose children to the arts, you expose them to creative thought processes that will serve them throughout their lives,” adds O’Neill.

Before earning baccalaureates in both Fine Arts (studio) and English (writing) from University of South Florida, O’Neill studied art at Brookes College at Oxford University, England; as well as at numerous museum workshops in Dublin, Ireland; Florence, Italy; and Naples, FL. She also studied art most informally in Central America, the Caribbean Islands, the U.S. western high dessert and several places quite off the map.

Predominately, O’Neill works with oil on canvas, inspired by the natural Southwest Florida environment. She also has a mural business in which she uses acrylic paints and has been known to step out of the two-dimensional world to have some fun assembling sculpture.

As a self-taught Blacksmith, Pennsylvania native Bruce Robertson takes a different route when creating his Souper Bowl-Marco Island masterpiece. “I am not a painter so I purchase a bowl, something whimsical and surround it with different types of wood and then add metal features. This year, the bowl has a crab in it, and I have added legs and claws to it,” describes Robertson, who is in his second year of participation 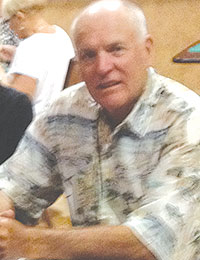 Although he has no formal art education, Robertson’s artistic journey has been one of constant learning and evolution. He began as a floral designer when he was 14 years old, and later, learned how to weld and forge iron into ornamental pieces. He has made hundreds of pieces over the years in Scotland, Ireland, Massachusetts, Ohio, California, Montana and Florida. One of his favorite pieces was a metal dolphin he made for the gates of the Globe Theater in London, England.

In his Marco Island home, he has been limited by space, and so he evolved again, now focusing on woodworking and making furniture and signs from wood. His work can be found at the Marco Island Center for the Arts.

His participation in Souper Bowl-Marco Island is the result of his ongoing support for the Chamber and its Leadership Marco program, as well as his belief in the importance of art in education.

“I think that the arts open so many doors for children and enable them to express themselves more than any other way. Creativity is an uplifting thing!” Robertson says.

Karen Swanker has been an artist since she first held a pencil. She held her artistic course through high school, and won a scholarship to Moore College of 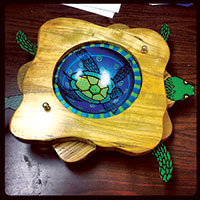 ‘Turtles’ was created for the 2014 Souper Bowl-Marco Island event by Bruce Robertson, a community favorite.

Art in Philadelphia. After graduation, she attended Hussian School of Art also in Philadelphia for advertising and illustration. She completed her degree in art at East Stroudsburg University. All the while, she taught arts and crafts to school and scout groups.

So, it is no small wonder that Swanker has lent her artistic talent to Souper Bowl-Marco Island for the last three years. “Children are most open to learning,” she admits. “They have no great fear of failure or defeat. They are easily willing to try.”

While she normally works in oils and found objects, the challenge of a new medium in ceramics added to the fun. This year, she tips her hat to Claude Money in a creation which includes water lily lotus flowers surrounded by geometric shapes.

Fresh from the completion of her Veterans Memorial Wall project at the Marco Island Historical Museum, well-known local artist Malenda Trick is creating a bowl for the Souper Bowl.

Art is in her blood, as her parents met in art class at 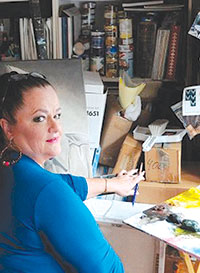 college. Every Christmas, she received art paper, colored pencils and water colors from which she created her first works. By age five, she sold her first work to noted ceramicist Howard Kron for a nickel. She sold her first portrait in the seventh grade, and by 16, was painting nudes using oil on canvas.

Trick’s style — “Romantic Impressionism” — was cultivated when she was commissioned by the Tennessee State Museum to reproduce the works of the great impressionists of the 19th century. Her style incorporates a rich palate of colors and tones that provide real depth to her work.

In 1999, she expanded her repertoire when was discovered by an art licensing agency. Today, Trick is one of the most preeminent artists in the home decor and gift industries having hundreds of products sold with her art on them, including apestries, stationary products, calendars, designer bank checks, and tile and stone murals.