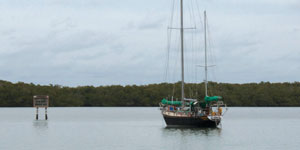 confuses citizens is what exactly qualifies as a live-aboard. State law mandates local governments to use the following definition of a live-aboard vessel:

• Any vessel used solely as a residence and not for navigation.

• Any vessel represented as a place of business, professional or other commercial enterprise.

• Any vessel for which a declaration of domicile has been filed pursuant to Florida Statutes, sec. 222.17.

Therefore, a working vessel capable of navigation does not meet the above definition and is not considered a live-aboard.  Also, state law prohibits 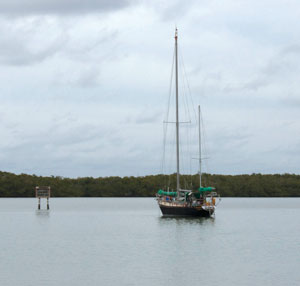 local governments from regulating anchoring of non live-aboards. For example, limiting the number of the days a vessel can be anchored in one spot, how far from the shore it has to moor, etc.  Therefore, the answer to the above questions is:  If a vessel is capable of navigation, even though it might have been moored in one place for an extended period of time, it does not automatically become a live-aboard.

Thus local governments do not have an authority to order a vessel operator to move a vessel in a certain number of days. However, local government enforcement agencies can and do enforce marine sanitation and safe navigation laws and local noise ordinances, as well as a host of other local, state and federal laws.  The Waterways Committee, in cooperation with the city’s environmental staff, has prepared a Boating Safety informational brochure. It has a lot of useful information, including untreated sewage pump out facilities, bridge clearances, and a number to call if illegal discharge is observed. The brochure can be seen on the city’s website at www.cityofmarcoisland.com or picked up at the Marco Island City Hall or Police Department.