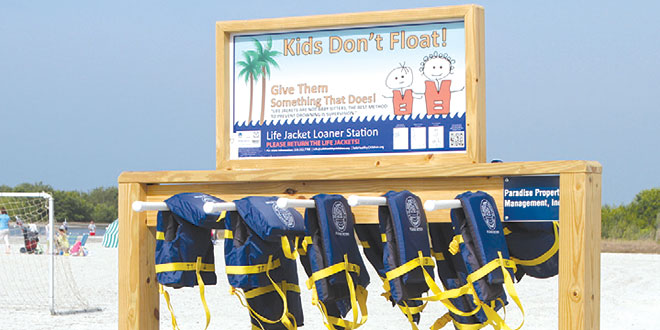 The stand at Tigertail Beach holds a total of 20 lifejackets.

The statistics are startling.

According to the Centers for Disease Control and Prevention, about 10 people die everyday from unintentional drowning. Of these, two are children aged 14 or younger, and for every child who dies from drowning, another five receive emergency department care for nonfatal submersion injuries. These nonfatal drowning injuries can cause severe brain damage that may result in long-term disabilities, such as memory problems, learning disabilities, and permanent loss of basic functioning.

Additionally, the United States Lifesaving Association reports that in some states — California, Florida, and Hawaii — drowning is the leading cause of injury death for persons under 15, and it comes as no surprise that the youngest of children (ages 1-4) have the highest rates of drowning. 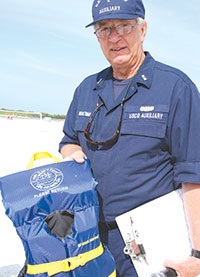 Bob Abudato of Floatilla 95 said, “If their efforts save one life, it will have been worth it…With good leadership you can accomplish a lot of good things.”

Modeled after the “Kids Don’t Float-Give Them Something That Does” initiative adopted in Homer, AK, in 1997, there will be 20 lifejackets 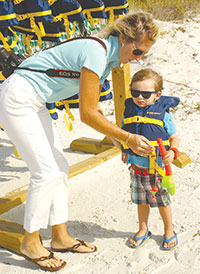 Kelly Sprigg secures the lifejacket for her son, Zane. PHOTOS BY VAL SIMON

The idea to bring the program to Collier County developed after pediatrician Dr. Todd Vedder attended to two-year-old Daniella Alexandra Pantoja who accidentally drowned at Sugden Park in June 2013. Vedder also is the chairman of the Children’s Coalition, whose mission is to achieve and sustain a zero drowning rate for children in Collier County. This ambitious and cooperative program will provide another layer of protection against drowning.

Together, Vedder and DiGrigoli put the wheels in motion to make the program a reality locally. Collier County’s Parks and Recreation Department built the stands and signage for the lifejackets, and program donors’ names are inscribed on the signs.

“We hope the city of Naples will join us,” Fiala told the audience gathered at Tigertail Beach. “And place (the lifejackets) along their beaches when they see how well the program works.”