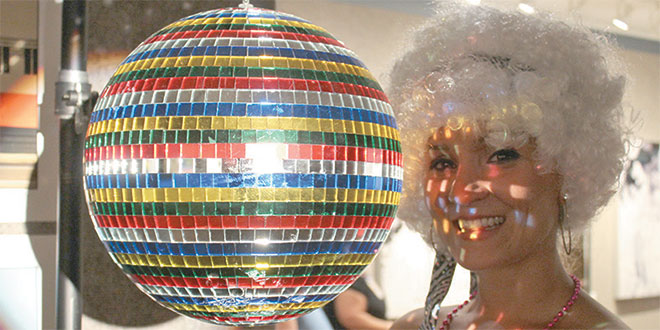 Kristina Lambros is part of ConnectivityME and a realtor with Keller Williams.

On July 1st the Marco Island Center for the Arts and ConnectivityME presented, “Let’s Grow Disco Night.” Participants for the event were encouraged to whip out their old bell-bottom jeans, sequenced tops and chunky heels for a night of dancing and fun. Entertainment for the disco party was provided by Ken Hodsdon and Rex De Jaager of Sun DJ’s. The event was well attended proving once and for all that disco, despite popular belief, is not dead.

The disco dance party was

People took their turns dancing down the line. Photos by Samantha Husted

represent the Center’s growth over the almost 50 years that it’s be open. “We turned it over to Bruce who made this wonderful, whimsical tree, that we think best replicates what our Center is here today,” said Wick. The tree can be seen at the Center.

Throughout the night the Sun DJ team played all sorts of disco favorites. From Van McCoy’s “The Hustle,” to Marcia Griffiths “The Electric Slide.” The DJ’s would throw in a slow song such as Elvis Presley’s “Can’t Help 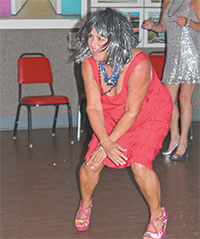 Wigs and sequins were a common theme that night.

Falling In Love,” every once in a while to give the dancers a much needed break. Event organizer Kristina Lambros, who donned a jumpsuit and a white afro wig led the group during the dance numbers and encouraged all to join in.

If you missed this particular party, don’t fear. The Center has more plans up its sleeve. “We have Halloween parties here, disco nights, and we’re thinking of a toga party,” said Lambros.