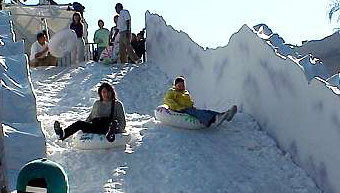 A new Christmas Island Style tradition in the making is happening on Saturday, December 15 at Veter­an’s Community Park. ‘Snowmania’ is set to bring 40 tons of snow to the park, along with games, slides and Santa, from 11:00 AM to 2:00 PM.

“We wanted to do something special for kids,” explains Steve Stefanides, the chairperson behind Christmas Island Style. The organi­zation has been saving up for about five or six years. “It costs about $7,000: you’re bringing tractor trail­ers and chunks of ice to make the snow.”

Christmas Island Style has planned for three piles of snow divided between children’s age groups. There will also be a slide and other inflatables. Santa will make an appearance and the Optimist Club will be selling hot dogs and other re­freshments.