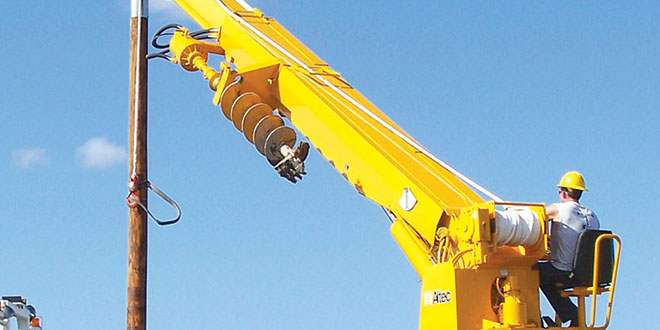 Many in the Marco Island community have wondered what happened to the osprey nests that were once perched on top of various power poles throughout the island. A quick email to Karen Ryan, LCEC’s public relations manager, solved the mystery.

According to Ryan, LCEC has a long history of looking for a safe, effective and gentle way of dealing with the birds, theirs nest and power outages. “At LCEC, birds/animals are consistently one of the top five causes of outages system wide,” she explained in her email. “On Marco Island, this year, the number one cause of power outages has been birds, predominantly osprey nests.”

Years ago, engineers and environmentalists thought they had a solution to protect the birds — in this case ospreys — while also proactively avoiding power outages, and LCEC and other utilities in Florida installed disc-shaped platforms on top of power poles where osprey were building nests in an effort to prevent the birds and their nests 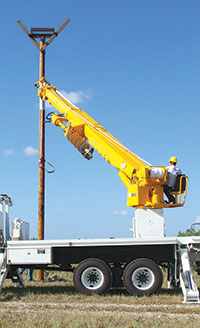 Platforms like the one pictured are being erected through LCEC service territories to prevent more problems between ospreys and power lines. PHOTO COURTESY OF LCEC

The results were not very favorable. First, the discs were very expensive at about $600 each, and they were not effective at curbing the conflict between nature and progress. “It was soon discovered that the discs were adding to the problem not improving it,” Ryan said. “Nests became so large that they spilled over the discs and eventually contacted the power lines, causing an outage and potentially a fire or death and injury to the osprey. In addition, the discs were an invitation for osprey to build on the top of power poles, inches away from critical equipment and they did not stand up well under the elements.”

LCEC went back to the drawing board and consulted with a national avian protection expert to develop a plan to discourage osprey from building on the top of power poles, and LCEC officials continue to evaluate the plan as new solutions become available. Ryan indicated that one of the main steps taken 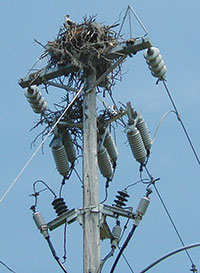 This is an example of an osprey nest that wreaks havoc on electrical services. PHOTO COURTESY OF LCEC

was to remove the discs from the top of power poles and to install avian deterrent and protective devices.

“Deterrent comes in various forms depending on the equipment, and it is harmless to the birds,” assured Ryan. “It encourages the birds to build their nests in a more natural habitat such as a tree. LCEC crews inspect poles from time to time to make sure nests are removed during the early stages of when they are being built to prevent outages and osprey fatalities — but you can imagine how it becomes a continuous cycle.”

Additionally, Ryan added, LCEC has a program to install platforms away from the power facilities. Working with the International Osprey Foundation and Environmental Services, a specific, inexpensive and easy-to-build platform was developed. “It works well for the birds and for crews installing the platforms. We have more information about the program on our website. We have more than 100 of these platforms throughout our service territory,” she said.

For more information, go to www.lcec.net.