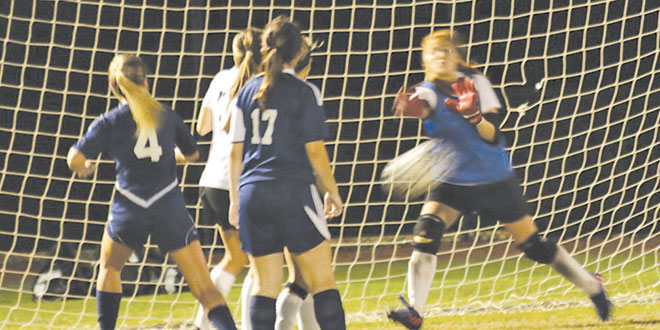 The MIA girls’ soccer team disappointed fans at the first home game on December 1, losing to St. John Neumann, 0-8. Abi Merideth, the team’s leading scorer, was held out by her doctor, and Lexi Harrington suffered an arm injury in the first minute. Down only three at half time, poor goalkeeping by Kayla Kladis sealed the team’s fate in the second half.

On December 3, at First Baptist, the Rays lost a closely contested game 1-3. Merideth, cleared to play, scored the only Ray’s goal. The game was played mostly in pouring rain. “It was raining so hard, I couldn’t see the other side of the field,” Coach Watt said, “The referee asked if we wanted to stop playing.” Down only two goals, neither Watt nor his team would think of quitting. “That told me something about the character of this team,” Watt said. “The girls were pouring water from their shoes at game’s end.” Then, on the following night (December 4) at home, the Rays broke through for their second win, beating Canterbury 7-5. The game opened in the rain, which lasted the entire first half. “Winterberry Park drains very well,” said Watt, “The girls were really pumped up for this one.” Morgan Jones scored the first goal, followed with goals by Miranda Webb (1), and Abi Merideth (5). Merideth was switched from center midfield to striker for this game, and responded brilliantly. “The girls were in control for the entire game,” said Watt, “The atmosphere was electric.” 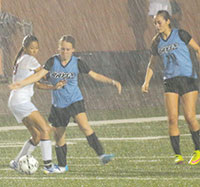 nail biter on Monday night (December 7) at Winterberry Park, the Rays scored an improbable come-from-behind victory (4-3) against SW Florida, a team that had beaten the Rays earlier. Miranda Webb opened the scoring from in close in the first minute, assisted by Morgan Jones. SW Florida scored the next three, leaving the Rays behind 1 to 3 at halftime. Until midway in the second half, the teams fought to a draw, each with hard shots on goal, but with both goalkeepers turning them away. Under relentless attacks by the Rays’ strikers and midfielders, Jones and Webb each got the ball to Merideth, who scored twice with 10 minutes remaining. With the score tied, 3-3, the teams went back and forth. With less than a minute to go, Merideth broke away for a shot outside the left crease. A pursuing defender was called for tripping, and Merideth sunk a high arching free kick from 80 feet away, into the right upper corner of the goal. It was virtually indefensible. And the crowd went wild – literally! The Rays defense, stiffened by the superb play of goalkeeper Kayla Kladis, held SW Florida scoreless for the entire second half. “The defense played awesome,” is all Coach Watt could muster while being mobbed by all 16 of his players.

In the next issue of Coastal Breeze, find out the results of the Rays game against First Baptist at Winterberry, which took place on Tuesday, December 8, and learn if the Rays were able to avenge another earlier loss.