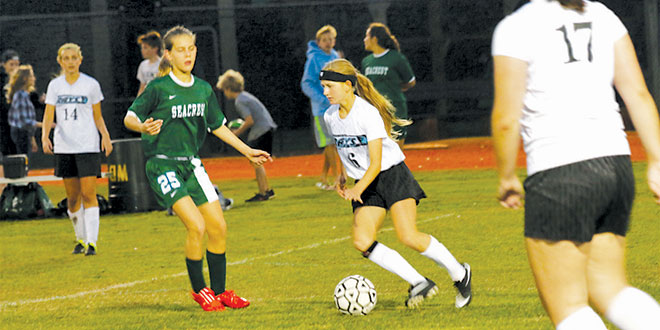 The MIA girls soccer team came of age on a December home game against a good First Baptist (FBHS) squad. Abi Merideth scored the game’s first goal dribbling in close from the right and propelling a ground shot into the far left corner of the goal. The score stood at 1-3, FB Baptist at the end of the half. None of the crowd left at half time, hoping and expecting an MIA come back in the second half. Despite First Baptist’s five goals in the second half, the Rays pulled to within I at one point, before losing 4 to 8. Merideth’s three goals in the second half came after she threaded her way through the FBHS defenders and broke free for her scores. It was the kind of dribbling that elicited oohs and aahs from the crowd (and the writer).

On Monday, Dec. 14, an extremely good Evangelical (EHS) team came to town. They brought in a record of 13 and 1 and had beaten Community School, a team which had twice sent the Rays to the showers early. “EHS is the best team in our division,” said Coach Jim Watt, “but I’ll bet we had their coach worried in the first half.” Perhaps so. EHS easily scored the first goal on a rifle shot and for the next 20 minutes bombarded goaltender, Kayla Kladis with sizzlers from all angles. They came rapid fire, but Kladis turned away all of them. It had to be frustrating for EHS. Finally before the half ended EHS made four more, all shot hard, none easy saves. In the second half, before EHS could score an 8-0 goal and end the game, Merideth kicked one in from 140 feet, just inside the midfield stripe. It was a line drive that went off the upraised hands of the EHS goalie caught unawares. The game ended in a 1-9 loss.

On a blustery Dec. 18 Friday night at Winterberry, the girls had to play Seacrest without Abi Merideth, who was visiting her father and Olivia Watt, on the bench with a concussion from a previous game. With the wind in their face, the Rays could get nothing going in the first half. Down 3-0 in the second half, Teagan Havemeir scored off a throw in from Miranda Webb. Late in the game Julia Wagner scored off a Havemeir assist. “We almost fought back and had the momentum at the end.” Coach Watt told me.

These last three games were characterized by some very good goaltending by Kayla Kladis and some feisty defense by Julia Wagner and Julia Cartwight, neither of whom would back down from charging attackers. Elizabeth Schulthies and Teagan Havemeir seemed to be everywhere at once, disrupting and annoying opposition attackers. All in all, the Lady Rays are coalescing into a team which is increasingly fun to watch.