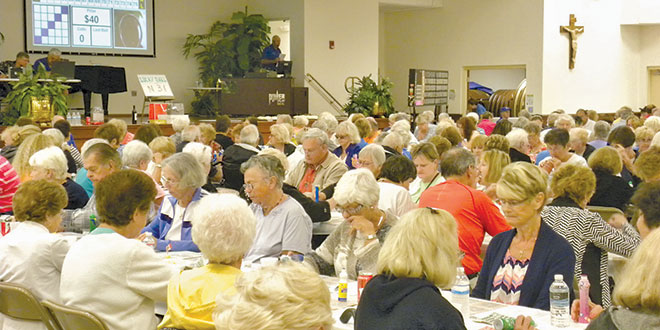 The San Marco Knights of Columbus 36th Annual Bingo Season opens the first Thursday in January. Grand Knight John Caltabiano hopes it will be another record setting year when the Bingo schedule begins on Thursday January 7, 2016, and runs every Thursday until April 7th, except for March 24th, the Thursday during Easter week. The doors will open at 5PM and the first Bingo game begins at 7PM at the San Marco Parish Center, adjacent to the church, at 851 San Marco Road on Marco Island.

In 2015 the Knights Bingo schedule pulled in 5% more players than the record setting previous season, even though in 2014 there were two more Bingo nights. Funds for charity through Bingo increased 8% year over year.

Caltabiano said, “Bingo is an attractive entertainment alternative for seasonal visitors as well as Marco residents, and this year we will again feature our weekly grand prize of a Coach handbag, in addition to the cash game prizes and door prizes offered at every Bingo session.”

Caltabiano says, “Knights’ Bingo is the most technologically advanced Bingo on the Island, featuring a computer driven bingo machine, which can project a video of the actual bingo ball as it is drawn.”

The Jumbo screen can also show an image of the entire bingo board and a picture of the exact winning card with the winning numbers covered. The classic lighted bingo board is also available to follow the game.

Bingo Financial Chairman Dennis Pidherny said, “Every year seems to bring more visitors to Marco Island. The economy is better and with the recent 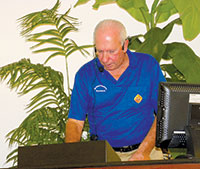 storms in the Midwest early in this winter season there will certainly be more visitors this year. Those snowstorms up North help us pile up higher attendance numbers at Bingo.”

In addition to the Coach bag and other prizes, bingo patrons are treated to an evening meal which varies every week from hot dogs to sausage sandwiches, and meatball subs.

The profits from K of C fund raising are donated to the disabled children and needy of the area, the Special Olympics, Habitat for Humanity, the soup kitchen in Immokalee, the Catholic Faith Appeal, Veterans services, and many other worthy causes. Knights’ donations also include college scholarships for local students.

Knights of Columbus and Columbiettes, the women’s arm of the organization, are all volunteers working as cashiers, floor attendants, and bingo callers.

Bob Brown, Bingo Chairman and caller said, “With Bingo attendance up in recent years we are fortunate that we have dedicated Knights and Columbiettes to handle the crowds. “

Bingo Caller John DeRosa, who has been at the board for 7 years, says “It’s not as easy as it sounds. Bingo players are a discerning lot so reading the numbers too quickly or not clearly will bring an immediate response from the crowd. But they are a friendly and forgiving group, who often bring along their lucky charms and enjoy the welcoming interactions with our Knights and Columbiettes on the floor.”

K of C District Deputy and Bingo volunteer Ben Farnsworth says, “The best part of the night is to see the smiles on players’ faces as they leave, even if they did not win. They always say, ‘see you again next Thursday’.