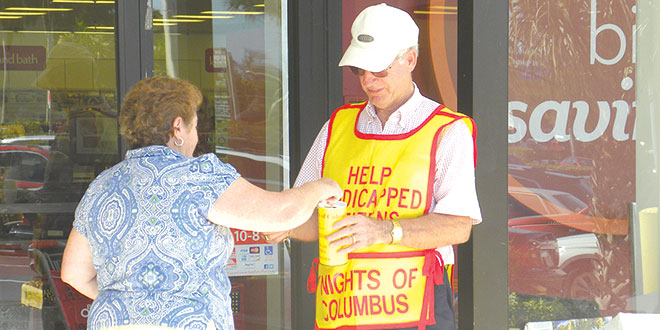 The San Marco Knights of Columbus have completed a successful Tootsie Roll drive to raise funds for children with intellectual and physical disabilities. The Knights, the Columbiettes (the women’s arm of the fraternity) and local volunteers offered donors a “Toostie Roll” in exchange for a donation. The Tootsie Roll Drive ran for three days, Feb. 21-23.

Grand Knight Ben Farnsworth said, “I am proud of the support we received from Marco residents and visitors, and thank them for their commitment to our youth who need these services.”

Volunteers solicited more than $14,000 from contributors at the following locations: Publix at Marco Town Center, Publix at Shops of Marco, both Walgreens stores on Marco, Winn Dixie, Sunshine Ace Hardware, Bealls and San Marco Catholic Church. Bob Brown, Marco city councilman and finance chairman of the drive, said, “The Knights are thankful for the unselfish commitment of these Marco businesses. To allow us to solicit at their stores is an immense help in support of children with disabilities.”

The drive provides funding for such programs as the Special Olympics, which offer year-round sports training and athletic competition, and supports training and education for kids with learning disabilities, autism, speech and language disorders and Asperger syndrome.

Dan Moll, the chairman of the K of C drive said, “The kids who suffer from intellectual disabilities face challenges which we cannot even imagine, and they deserve our respect and help.”

Farnsworth agreed, “The best reason to support this effort is reflected in the Special Olympic motto which every Special Olympic Athlete says before every competition, ‘Let me win, but if I cannot win, let me be brave in the attempt.’”