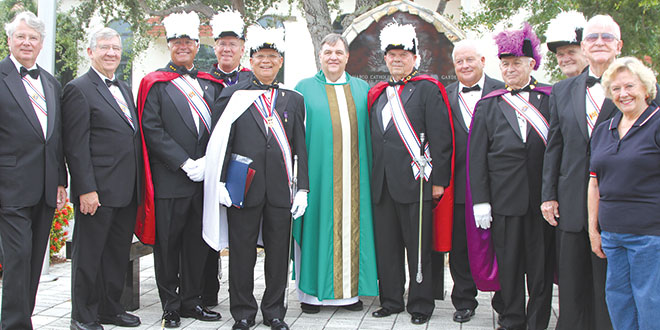 All pose for a group photo after the Flag Day ceremony.

In recognition of the 60th anniversary of Flag Day, the Marco Island City Council gave the Knights of Columbus a Proclamation. The proclamation was given during a City Council meeting and read during a brief ceremony held by the Knights of Columbus after mass on Flag Day. Knights attending were in full regalia. The ceremony was held in the Memorial Garden of San Marco Catholic Parish and was presided by Father Tim Navin. The National Anthem was sung by Pat Ettensohn.

The proclamation by the City Council stated: “By an Act of Congress in 1949, June 14th was designated as National Flag Day. Under President Dwight Eisenhower, a Bill to include the words, “Under God” in the Pledge of Allegiance to the Flag was passed. In a letter dated August 6, 1954, President Dwight D. Eisenhower praised the Knights of Columbus for their tireless efforts to have those words added. Eisenhower said, ‘These words will 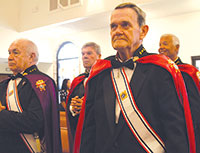 Knights proceed to communion during mass.

remind Americans that despite our great physical strength we must remain humble. They will help us to keep constantly in our minds and hearts the spiritual and moral principles which alone give dignity to man, and upon which our way of life is founded.’ President Eisenhower expressed his genuine gratitude to the Knights of Columbus. On June 2nd, the Marco Island City Council urged all citizens to ‘Pause for Pledge’ on June 14th.”

The Knights of Columbus also received a proclamation from Gov. Rick Scott which states, “WHEREAS, after approval by both houses of Congress on June 14, 1954, President Dwight D. Eisenhower authorized the change, saying ‘In this way we are reaffirming the transcendence of religious faith in America’s heritage and future’…

“NOW, THEREFORE, I, Rick Scott, Governor of the State of Florida, do hereby extend greetings and best wishes to all observing Flag Day, June 14, 2014, as the 60th Anniversary of Addition of ‘Under God’ to the Pledge of Allegiance.”