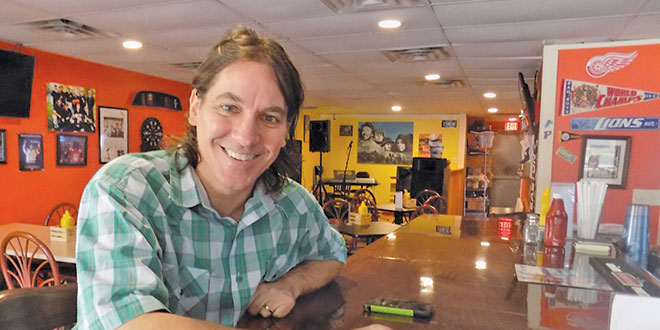 Kirk McFee is pleased with the way his business is growing. PHOTO BY BARRY GWINN

In March 1971, Kirk McFee was born. In August 2014, Kirk’s Coney Island opened its doors in Old Marco. On Super Bowl Sunday, February 7, 2016, it had one of its best days ever. What happened between those dates is the subject of this story.

Kirk McFee was born and bred in Detroit. In 1996, he received a degree in human resources from Madonna University, Livonia, Michigan (a Detroit suburb). Kirk’s mother is an ex-nun who saw to it that the nuns who ran the university kept his nose to the grindstone. The arrangement must have worked, as Kirk was on the dean’s list all four years.

After graduation, Michigan Blue Cross/Blue Shield hired Kirk as a manager in its HR department at an annual salary of $45K. Kirk oversaw most of the hiring and firing of Blue Cross employees. This was unpleasant and didn’t sit well with him. “I figured it might be me they would be firing in 20 years,” said Kirk, “I would be making too much money and they would get another guy for less.” A song he had heard on the radio gnawed at him. He had never had any musical training but felt he could do better than what he was hearing on the radio. “I felt the stirrings of a desire to create music,” said Kirk, “I decided to quit my HR job and move to Los Angeles. Left on the table in Detroit was a $25K scholarship offer from the Seton Hall Law School, and an $85K offer from the General Motors HR department. “I had 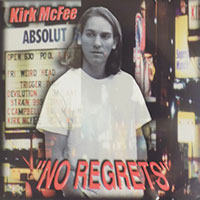 heard that one should find something they like to do and the money would follow,” Kirk said, “If you work at something you love, you’ll never work a day in your life. I had my heart set on music.” In 1997, Kirk packed his stuff in a U-Haul and headed west.

In LA, Kirk found a job as a production assistant in a recording company. He emptied garbage cans, ran errands, and delivered film for $125 a day. He let his hair grow. He was also answering ads, lots of ads, for vocalists. He bought a Takamine guitar and a chord book, and labored at night learning how to play it. “I wanted to write a song,” said Kirk, “In order to do that I needed to learn to play a guitar.” After a year and a half of this, Kirk landed his first gig. It was a one-hour gig at the Coconut Teaser, on Sunset Strip. This led to an offer from a “guy who owned a studio.” The guy offered to record the four songs Kirk had written. “It cost me $900 to record those four songs.” Kirk told me, “I sold the CDs for $10 apiece.” His first CD was entitled “No Regrets.” So far, Kirk has sold 910 copies.

Kirk’s gigs at LA area clubs were garnering attention. A larger studio wanted to record a ten song CD. They wanted to do it in two weeks’ time, and told Kirk that it would cost him $14K to produce it. “I had good credit and some money saved from my Detroit HR job,” 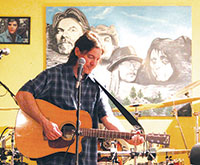 Kirk performs on a recent Saturday night. The mural on the wall behind him was painted by his brotherin- law, and depicts Detroit rock stars, from left: BobSeger, Ted Nugent, Kid Rock and Alice Cooper. PHOTO BY BARRY GWINN

Kirk said, “I put $14K on my credit card and signed up.” Kirk had two weeks to write six new songs, both music and lyrics. The result was “Apartment 19,” named after Kirk’s Hollywood apartment. To date Kirk has sold 1,010 of these. His CD’s were offered at his many gigs. A third CD followed entitled “More Time than Money.” It contained ten new McFee songs and cost him $9K to produce. He has since sold 3,500 of these. While in LA, Kirk planned his own tour to 17 cities, including Detroit, Toronto, Boston, New York and Greenville, South Carolina. “I was hoping to be discovered by a big-time producer on the tour,” he said.

In 2002, Kirk moved back to Detroit, got a real estate license, bought a home, and continued appearing at area clubs. He made enough to pay the mortgage and settle in – until 2007, when he briefly managed a car wash in Atlanta, pursuing recording opportunities there. In 2008, he heard about Marco Island. A friend had recommended the “paradise” of Marco, and sent him to a Marco watering hole where he was offered a steady gig. “I always think of the next adventure,” Kirk told me, “Marco Island sounded like a good base for me.” The gig fell through, but Kirk was able to support his family with as many as 250 appearances a year in Southwest Florida clubs. He met and married Christine in Marco. In 2013, he had another idea. He would open a restaurant in Marco and entertain the patrons with his songs there. He had 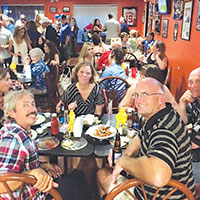 no training as a restaurateur or culinary manager, but never wavered. “I am a fast learner,” he said, “I stick with something until I have it. With a local restaurant I wouldn’t have to be constantly on the road. I could perform close to home.”

It was also an opportunity to bring Coney Island Hotdogs to Marco Island. “Every Detroit area kid was weaned on them,” Kirk told me. Largely unknown outside southeast Michigan, the Coney hotdog was the Philly cheesesteak of Detroit, he said. According to Kirk, the chili dog originated in Detroit in 1914. It was invented by a Greek immigrant who had come in through New York, and named it after Coney Island. He opened the two original Coney Island stores in Detroit. The name was never trademarked, and as stores proliferated, the owners added their names to the signs out front. Hence, Kirk’s Coney Island in Marco Island. In November 2013, Kirk signed a lease and his father-in-law, experienced in renovations, came down to help get the place ready. The next day he dropped dead in the living room of the McFees’ residence. Much of the next ten months were spent ministering to his family and spending time with the in-laws in Detroit and Philadelphia. Finally, in August 2014, he opened for business. At times it has been a struggle. “I have been cook, dishwasher, bartender, cleanup guy, and server,” said Kirk, “sometimes, all at the same time.” In June 2015, Christine, 28, became pregnant with their second child. Daughter Gracie was four.

Kirk and Christine McFee are parishioners at the San 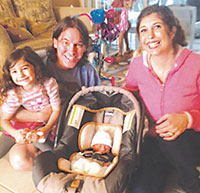 Marco Catholic Church. In mid-December, Janet Stapleton, a leader of a church outreach group, heard about a dire situation in the McPhee household. “Christine McFee has a high risk pregnancy and has been ordered to bed rest,” she told the group, “Doctors are trying to give her 35 weeks, in hopes that the boy’s lungs will develop enough to survive.” Thirty weeks had already elapsed. The group knew that Kirk was struggling to keep the restaurant going during this time, and that he had to be there constantly. Kirk will never forget what the church did then. “For the last five weeks of Christine’s pregnancy, the church brought food every night for Christine and Gracie,” Kirk said, “Someone [from the church] paid for weekly maid service for six weeks. Then someone else pitched in for another seven weeks. We were getting cards, letters, and gifts from strangers. People were coming in to the restaurant. At the time, I was exhausted and don’t know how I could have done it without the church’s help.” Matteo McFee, all 3 pounds 9 ounces of him, arrived on January 12. He was discharged from the hospital on January 27. Matteo now weighs in at 5 pounds and is doing well. Christine is healing nicely. Kirk’s parents and Christine’s mother arrived shortly before the birth of their grandson. They will be staying for a while.

Kirk’s business is growing. He performs at his restaurant almost every night. He still hopes that a producer will drop in and rediscover him. He is happier than he has been in a long time. There are some nice folks on Marco Island.