Kicks and Crabs at Karate Fundraiser 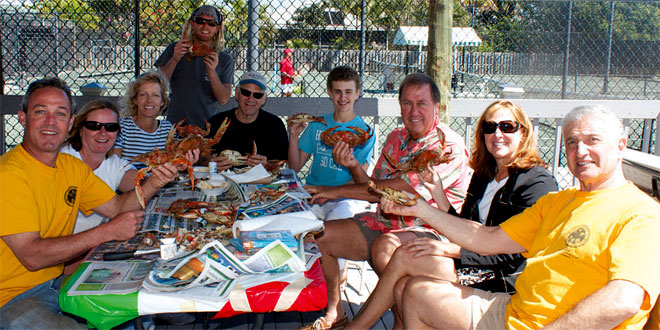 It was blue crabs and blue skies at the Greater Marco Family YMCA on Saturday, March 16th. The Second Annual Karate Dojo All-You-Can-Eat Blue Crab Fundraiser lasted four hours – from noon to 4 PM – and the amount of blue crabs consumed was unbelievable.

Just as unbelievable is the fact that Sensei Nick has taught his Seibukan Karate and Matayoshi Kobodu (think karate with weapons) students Japanese. Well, a bit of it anyway. Some of Sensei Nick’s younger students gave a pool-side demonstration of the “kata,” or specific movements designed to teach fighting postures and positions. The application of the kata is “bunkai” which the students also demonstrated. Their fighting techniques were quick, sharp and well-practiced. Young Bruce Lee’s in the making.

“I have about 25 students between the two programs here at the YMCA,” explains Nick. His students age in range from six to 65. While the younger ones literally 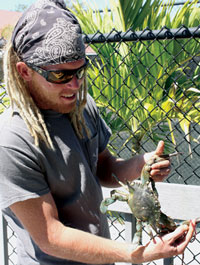 and figuratively get a kick out of the program, the older students enjoy it for the physical fitness. William McKee joined after he noticed his son Ford’s strength improving. William has since lost 30 pounds. Another one of the “senior” students, Al Musico, has lost 20 pounds.

New student Bob Schuh has already lost seven pounds even though he’s had a knee replacement. Schuh prefers to refer to it as his “bionic knee.”

And so, the students, young and old, large and small, gathered to eat blue crab, smoked mullet dip, corn on the cob and green beans and guzzle down sweet tea and lemonade. For those not interested in blue crab, Sensei Nick cooked up hot dogs and hamburgers.

The blue crabs were donated by “Crabby Stephen” Finn, who catches blue crab for a living. He can often be found cooking up his crabs with his special seasoning and selling them by the bagful across 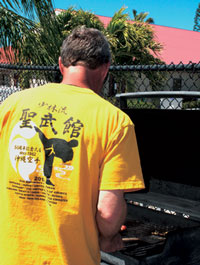 Sensei Nick mans the grill for the kids.

from Stan’s in Goodland on a Sunday.

“I do a demonstration for the kids and when they see the live blue crab they all start screaming,” laughs Finn. “The kids were excited to help. I let them toss in some of the seasoning but I think they definitely preferred seeing the crabs alive.”

Most of the kids, it seemed, opted for the hot dogs and hamburgers. But the adults that came, whether in the karate programs or not, ate the heck out of those delicious crabs. Old newspapers lined the table and freshly cooked blue crabs were simply piled up on the table. Buckets and paper towels were also on the tables to dispose of the crab shells and to re-wipe and re-wipe and re-wipe hands and faces.

Everyone at the event had a great time. The kids demonstrated all they had been taught by Sensei Nick then played in the pool while the adults gathered,

Bryant Martinez is ready for battle.

laughed and ate. The lightheartedness and welcoming environment made it feel as if Sensei Nick, his students and their families were really just one big family having a get-together. Oh, and Crabby Stephen, of course – he’s a part of that family too. Seventy percent of the proceeds from the event will go directly to Sensei Nick’s program. “We need mats and sparring equipment,” he explains. The other 30 percent of funds raised will be given to the Y programs of which Nick and his students choose.

Karate and Kobudo classes are taught Monday through Thursday in the afternoons and evenings and on Saturdays in the morning at the YMCA. Sensei Nick welcomes anyone interested to come and attend a class for free and watch and see what it’s all about. For more information, call 239-394-9622 ext. 200 or visit the YMCA and ask for Sensei Nick or pick up one of his two flyers on the wall.