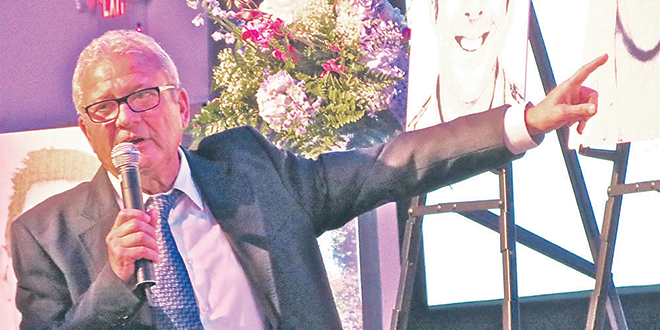 Dan Alon, keynote speaker at Chabad’s annual fundraiser and one of five survivors of the Munich Massacre at the 1972 Olympic Games, was a member of Israel’s fencing team. He spoke surrounded by photos of the eleven athletes, trainers and coaches who were murdered by the Black September terrorist group.

On Wednesday, March 18, nearly 500 people from the Naples/Marco Island communities assembled for the Chabad of Naples Gala Event at the Ritz-Cartlon Tiburon to hear keynote speaker Dan Alon, who was one of five survivors of the terrible Munich Massacre that occurred during the 1972 Olympic Games in Germany. One could have heard the proverbial pin drop as Alon, a member of Israel’s fencing team, spoke for almost an hour, recalling in painful eyewitness detail the events of the horrific day when eleven members of the Israeli Olympic team — athletes, trainers, and coaches were murdered by the Palestinian group known as Black September.

Alon trained as a fencer from childhood, he said, coached first by his father, a Hungarian fencer who relocated to Israel with his family. He was successful at the sport, winning awards until he finally qualified at the age of 27, for the Israeli Olympic team.

Alon stressed the importance of these Olympics, as it was the first time the games were being held in Germany since before World War 2, when Hitler was in power. For the newly-emerging nation of Israel to attend and do well was a great challenge and an honor. However, who would ever have imagined the horror and pain that would result from what began as a worldwide competition emphasizing brotherhood and the Olympic spirit, as the Israeli athletes had proudly marched into the stadium at the opening with all of the other competing countries? Certainly not the young athletes who were rudely awakened that night in early September, forced from their beds at gunpoint and taken hostage. Alon clearly recalled the details, minute by minute, beginning with the knowledge that somehow he and the four other athletes in his room had been temporarily ignored, and culminating with the death of all the hostages and most of their captors at the airport.

Listening to gunshots and noises, and peeking out the window to observe that they were surrounded by gunmen bearing Kalyshnikov rifles and wearing

Rebbetzin Ettie Zaklos, Director of the Chabad Preschool of the Arts, (left) presents teacher Katy Abraham with an Award for Excellence, for her outstanding contributions to the school.

ski masks, the five young men realized they had but three options: one of the Israeli marksmen in the room had his rifle and at such close range he could have killed the one terrorist in view — but then how many more armed terrorists were there and what would happen to all of the hostages? They could sit and do nothing, but eventually their room would also be stormed and they would be taken. They could try to escape; this seemed to be the best choice. Their apartment had a rear exit to a balcony with creaky wooden stairs that led through a garden. One could just see these terrified young men, deliberately dressing in their Israeli Olympic outfits which could be their shrouds, planning their escape. One by one, they left the room, negotiated the noisy stairs as quietly as possible, and fled through the garden to the waiting policemen. Alon said that he was the second man to go, and possessed by curiosity he had turned and looked at the masked gunman on the terrace, about two to three meters away from him. He claims the terrorist looked right back at him but for some reason did not shoot.

In the tense hours that followed, the Black September group made demands that included being flown to a safe haven and although they had already murdered and left bleeding bodies behind, were taken to an airbase. Alon overheard policemen say none of the terrorists would leave Germany alive, and feared with reason, for the safety and lives of his friends. Before their departure at the airport all the hostages in one plane were murdered, five of the eight terrorists were killed by police, and terrorists blew up and killed everyone aboard the second aircraft.

Devastated, the remaining athletes collected the possessions of their friends – the toys and souvenirs meant for their children and families, and returned to Israel with their flag-draped coffins. One coffin, that of David Berger, was returned to his family in 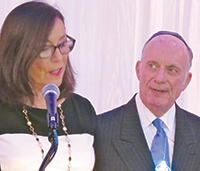 Honorees Ellen Goodman-Savage and Sam Savage accept an award from Chabad of Naples, for their continual support of the organization.

Cleveland. Alon said the airplane was met at Tel Aviv’s Ben Gurion airport by thousands of quietly mourning Israelis who stood in silent tribute to their lost friends, colleagues, and fellow men. In the years that followed, Alon personally suffered from depression and paranoia, saying he never feels safe even now, unless he is in Tel Aviv. He eventually met and married his wife Adele, a nurse from South Africa, and had three children. It took him many years until he was able to resume the sport of fencing. He never spoke of his tragic experience to anyone at all, not even his family, until a few years ago when he was encouraged finally to share the details. As a result of the tragic events of 1972, security measures for Olympic Games and concerns for athletes’ safety have changed drastically.

Alon admits it will never be ‘easy’, but surrounded by the photos of the lost athletes, he somehow now, at age 70, find speaking publicly is necessary. It seemed a small victory for him when he returned to Germany to speak for the first time since the Massacre, and asked his host driver, a Chabad rabbi chauffeuring him in a van with loudspeakers, to take him to the Brandenburg Gate just before his early morning departure. He asked the rabbi to broadcast as loudly as he could, the music to Am Yisroel Chai (Israel lives!) and together they danced in the street in front of this symbolic location. This broke the tension of his narration as the crowd, with mixed emotions of tears and joy, stood to applaud Alon. At a cocktail party earlier in the evening Rabbi Zaklos and his wife Ettie. on behalf of Chabad of Naples honored Ellen Goodman-Savage and Sam Savage, for their years of tireless support and continual pro bono legal assistance; Moriah and Roni Elias for their ongoing financial support and assistance, especially during reconstruction; Kathy Abraham, an outstanding teacher of excellence for her work at the Chabad Preschool of the Arts.