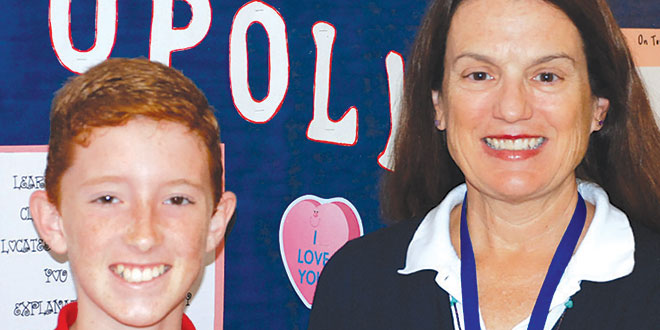 Ask Kevin Barry what “tolerance” means, and he will give you a couple of definitions. The Tommie Barfield Elementary School fifth-grader first will tell you that tolerance, “is the willingness to accept others who are different.” Second, he will say, “it is the capacity to endure harsh environments or difficult situations.”

Ask Barry for an all-encompassing example of these definitions of tolerance, and his answer will be Abraham Lincoln. “He showed tolerance,” explains Barry. “He defended the slaves, and he fought for freedom for everyone to be treated the same. He showed tolerance all of the time — through his whole life… What did he get for this? He was assassinated.”

Barry made this case in his winning composition for the 18th Annual “Laws of Life” Essay and Speech Contest. Barry is the first student from TBE ever to place first in contest, and Ellie Poling was also a finalist this year. The contest is sponsored by the city of Naples, Collier County government, the Naples Young President’s Organization (YPO 49ers) and Collier County Public Schools.

According to TBE Principal Dr. Jory Westberry, the “Laws of Life” contest helps young people focus on and develop positive character traits that lead to successful citizenship and a successful life. There were more than 4,100 students from across Collier County who submitted essays from grades four to 12. Forty-one essays were orally performed in front of 12 judges at the MLK Center in January, and the first-place winner from each category presented their speech at a banquet in February at the Naples Hilton. Awards ranging from $100 to $2,000 — including the Bonnie MacKenzie Loveday Laws of Life Memorial Scholarship — were presented to the winners.

TBE Reading Specialist Debbie Cooper spearheaded the “Laws of Life” effort at the school. It was an optional assignment for interested fourth and fifth graders. “The topic was decided by the district, and the students could write about famous people, someone they know or themselves,” Cooper says.

Each student went through a series of group edits and revisions lead by Cooper. Through a succession of question and answer sessions, students developed their thoughts and wrote their essays. Cooper notes that she was not surprised Barry won after watching him go through the creative process.

“It was very fun to watch Kevin go through each step,” she adds. “He is a student to where he will listen to what you are saying, and he took it home and reworked some of his thoughts. Now, he is reaping the benefits of that.”

“I was very surprised and excited,” Barry remembers. “I was especially glad my grandma and grandpa were there. My grandpa has been in the Mayo clinic all winter fighting cancer, and I was very glad he was here to hear my speech.”

Kevin — who wants to be a particle physicist or the President of the United States when he grows up — won a $250 gift card. He still is considering what to do with his winnings.

His mother, Kim Barry, is very proud of him: “I kept asking if he was nervous, and he never was. He truly loves speaking in public. He thinks its fun, and it will definitely be a useful tool for him in the future.”