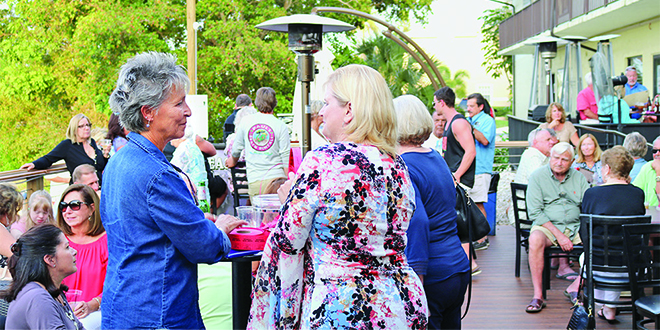 The term “We Are Family” truly has meaning at the Keller Williams Realty firm. When the plight of little Jenny Sagan, whose mom and dad are realtors at the firm, became known to Sandy Sims and her team leader Cindy Griesse they sprang into action to assist the family. Together, with the Collier County Sheriff’s Office, Marco Island Police Department and The Speakeasy they found a solution to a challenge.

Little Jenny, who is a wonderful dancer and has a smile that will truly light up a room, has Down syndrome, with a tendency to roam away from home on occasion. Jenny’s mom and dad, Allan and Jennifer Sagan have secured their home, but on occasion Jenny does manage to overcome those obstacles and wander off from home.

On one of Jenny’s recent excursions she managed to be gone for several hours before first responders could locate her. However, this was not before she had incurred numerous injuries to her feet and legs. Those injuries required her to remain in bed for two weeks.

The Collier County Sheriff’s Office (CCSO) has had available to it the technology which is referred to as Project Lifesaver for some time now. It is used to assist in finding those that may suffer from dementia, Alzheimer’s disease, Down syndrome, autism and other medical conditions that may cause the subject to wander and/or be confused.

The CCSO first deployed handheld receiver devices in 2006 that would link with a special bracelet that is worn by an individual and looks like a watch and serves as a transmitter. In 2008 the department added the ability to search from the air with a receiver mounted to their aviation unit. The CCSO has made over 1,400 such searches since deploying the technology.

The issue that faced the Sagan’s became the wait, which may sometimes take close to an hour to have a deputy arrive with a receiver, provided they were available. The danger that presented to the safety for Jenny, or any other individual who had similar challenges becomes the issue. “The sheriff’s office has been outstanding and we can’t say enough about the kindness they’ve extended to our family over the years,” said Jennifer Sagan, Jenny’s mom.

“Time is the issue of greatest importance in issues such as this, and there have been numerous such situations over the last several years on Marco, especially dealing with an aging population and the associated issues related to dementia and Alzheimer type afflictions,” said Captain Nick Ojanovac, who oversees patrol operations for the Marco Island Police Department.

The Keller Williams Realty firm has now raised the necessary funds to purchase the hardware that has been so successful with the Project Lifesaver Program, and soon, two handheld receivers will be donated to the Marco Island Police Department. “This donation will go a long way to helping both agencies; the CCSO and ourselves to do a better job for our residents,” continued Ojanovac.

The recent fundraiser held at The Speakeasy helped raise the necessary funds to provide the department with two of the handheld receivers. “It was just an amazing turnout last week. You couldn’t help but be moved by the efforts of everyone that came out and gave so much of their time, talent and treasure,” said Sandy Sims. “Angela Larson of the CCSO has been a big help guiding us and insuring we are on the right track,” commented Sims. Larson is the supervisor of the Victim and Senior Advocacy Program with the Collier County Sheriff’s Office.

Details on how to access the benefits of Project Lifesaver should be directed to Angela Larson of the CCSO at angela.larson@colliersheriff.org or call her at 239-252-0231.

To receive more information regarding Project Lifesaver, please visit their website at www.projectlifesaver.org.