Keep Calm and Boat On 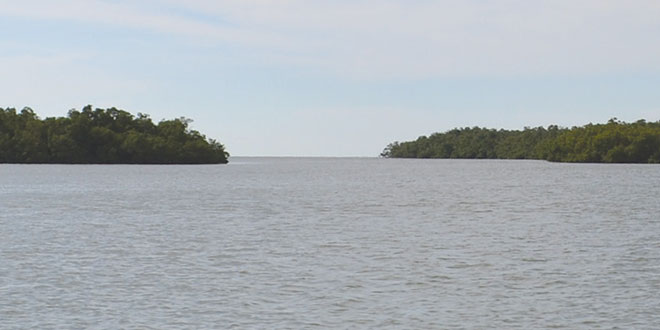 Since moving to Florida almost one year ago, I’ve felt like a stranger in a strange land, a tourist most times, learning the lay of my new homeland with each different excursion. Until now, the various trips I’ve taken have always been structured with a fairly strict itinerary of stops and attractions, but I can honestly say, I’ve never felt more in control of my recreational destiny as when I went exploring with fellow Goodlander and owner and sole operator of Island Boat Trips Captain Mike Hewitt.

Born in England and known locally as “English Mike,” he moved to Goodland in 1989 and started his business, Island Boat Trips, roughly six years ago, when a demand presented itself. Working with Tony Smith at Tigertail Beach, he said people were always asking how to go about getting out on the water. The options were limited to booking a half-day fishing charter or renting a boat and venturing out into unknown, and often times, unforgiving waters. That was when he decided to put his 25

Captain Mike at the helm of his boat. PHOTOS BY MELINDA GRAY

years of local knowledge to work.

His experience in the canals and bays surrounding Marco Island and Goodland allows him to navigate almost effortlessly, all while telling about the history of each attraction his tours encounter along the way. Not only were his stories fascinating to me — an admitted history buff — but his method of telling them let me visualize how things used to look and how the land has changed over time.

“I always think I’m boring people with my stories, but everyone I’ve taken out always seems to have enjoyed their trip. I must be doing something right,” he said.

And in my opinion, he is. As we planned the trip a few days ahead, he asked what I thought I wanted to see during what would be a three-hour ride. Having a chance to build my own tour wasn’t what I was expecting, but it left me with a truly unforgettable experience. Seeing Cape Romano was really my only goal; I’d been hearing about it since December, and my kids had already

been there. I’ve been fascinated with the “urban exploration” trend, and though I wouldn’t be able to go inside, I knew that snapping a few pictures would quench my curiosity.

At 10 AM on a beautiful, cool, sunny morning, we climbed aboard his 22-foot Hurricane, by far one of the most comfortable boats I’ve ever been on, and set out on our journey. As we cruised into Gullivan Bay, nature’s first attraction made its appearance: two playful dolphins aligned themselves in our wake and proceeded to frolic in and out of the water behind the boat for their photo-op. It was a brilliant beginning to the day, something I had never seen, and it only got better from there.

I did finally get to see Cape Romano for myself; it was beautiful and tragic to see nature reclaiming the man-made oddity. We went through Blue Hill Bay, Barfield Bay and past Blind Pass. I saw so many interesting places; Mike pointed out remnants of old structures and told me about the people who built them and

Heading out of Goodland, we passed a canal I knew well; I can almost see my house from here.

then left them long ago. The trip was relaxed and upon our return, I felt renewed.

“I like to run a relaxed operation. I go where the people want to go, and show them what they want to see. It doesn’t feel like work to me, and I want to keep it that way,” said Mike.

For me, that’s what made it so special. I went where I wanted to go; saw what I wanted to see. I came back to Goodland knowing so much more about my home, its history and the water surrounding us. I also got some spectacular photos, but they can’t compare to the wonders I saw with my own eyes. It was a day I will never, ever forget. For more information, please visit islandboattrips.com.