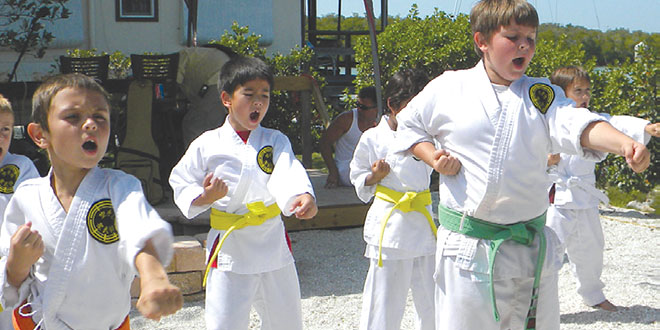 When people think of Karate, they think of Bruce Lee, Jackie Chan and Mr. Miyagi, but make no mistake young grasshoppers, there is much more to it than the Hollywood portrayal. Nick Lemke, owner and sensei of Shima Dojo, will tell you that.

On Saturday, March 22, Shima Dojo held their Third annual All-You-Can-Eat Blue Crab fundraiser. Unlike the previous fundraisers, which were held at the YMCA on Marco Island, this year it was hosted by Marker 8.5, and the setting was perfect.

Students showed off their skills to proud parents and audience members enjoying their meal. Led entirely in Japanese, as they learn in their classes, the children had fun as they moved through the demonstrations with ease.

This year’s fundraiser was a huge success, pulling in around $1,600 which will be used to help pay the dojo’s charter fees, hold summer camps, 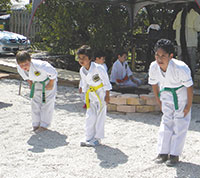 A respectful bow is offered to thank the crowd.

put on other events and lend financial assistance to students for class fees. Lemke attributes the event’s success to the students’ dedication and the island collaboration of Goodland residents who pitched in to help. Stephen Finn donated around 400 lbs of blue crab and cooked and served them to diners; locals helped to set up and prepare food; and Marker 8.5 and its staff graciously hosted the occasion.

Sensei Nick started his own Dojo in 2010 under his home in Goodland. Two years later, he moved into the YMCA on Marco Island, and officially named it the Shima Dojo. A rather fitting title as the Japanese word “shima” translates to mean island.

Lemke began studying Karate 20 years ago with his brother, and has since immersed himself in the constant betterment of the art and the ongoing improving of himself, synonymous with serious martial arts.

Sensei Nick brought shrimp and fishing gear to entertain his students between demonstrations. Two fish caught by the kids were proudly on display. PHOTOS BY MELINDA GRAY

He’s travelled to Okinawa, Japan, three times to train under the “head of system” for a total of six months; and he brings his commitment and experience to fruition with his students.

“I must have the best kids in Marco! They are so good; they do what I ask, listen to their parents, do their homework. They do well in school and at sports; they are the cream of the crop,” said Lemke.

He is proud of what he’s created: a dojo that can trace their lineage to 1962, when Zenryo Shimabukuro founded the Shorin-ryu Seibukan Karate style and dojo in Okinawa. Lemke is vigilant in his efforts to stay as connected to that lineage as possible.

Spending up to 10 hours with his students in any given week, he teaches them what he’s come to know. Karate is more than a form of Martial Arts; it’s a lifestyle.