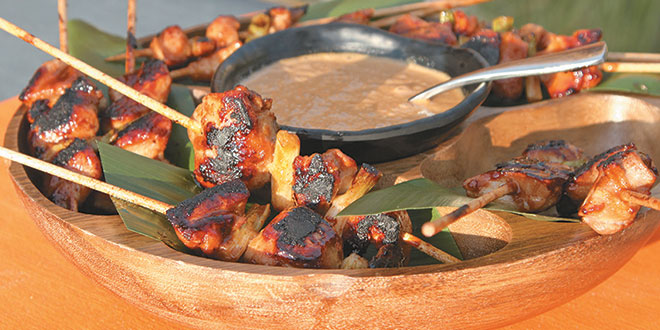 On June 3 the Marco Island Marriott Beach Resort and Spa officially welcomed in their newest dining addition, Kane Tiki Bar and Grill. Kane is located just steps away from the beach where the South Pacific meets Southwest Florida. Its placement is part of a well thought out plan to align the restaurant with the setting sun.

“Our architect really had a thought in mind,” said general manager to the Marriott, Rick Medwedeff, in his address to the audience. “He was going to align the structure of Kane to a specific point that ties to the sun setting during the winter solstice. During that time, right before Christmas and all through our season, you will have an unmatched, incredible visual of the most spectacular sunsets.”

The name Kane comes from the Polynesian god of creation and growth. An apt title for the 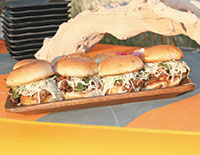 ever-evolving Marriott, which by 2017 will have officially transitioned into a JW brand property. Once the redevelopment is complete, Kane will be one of 10 food and beverage stops at the resort. Currently there are two more to be added.

“We’re really excited about the grand opening,” said Executive Chef James Samson. “We didn’t have anything like this before, either on the island or at the resort.”

Samson describes Kane as a “Polynesian/Indonesian mash up.” The menu offers small bite items such as chicken yakitori, hoisin pork belly bao, smoked Kahlua pork sliders and mango shrimp rolls with basil. Kane also boasts an extensive selection of rums that are meant to compliment the fare. “We wanted all these flavors of the food to be a supporting element to the cocktail culture of the lounge,” said Samson. The rums, many of which are indigenous to 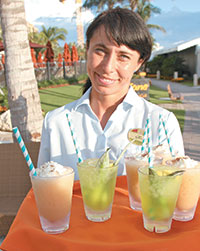 A server with signature cocktails, “The Remedy” and “Mana Tea.”

the Polynesian/Indonesian areas as well as the Caribbean, are available for tasting in flights.

During the grand opening, servers walked around with samples from the menu and offered guests some of Kane’s signature rum cocktails. “The Remedy” a popular option, consists of Smaks Chai Rum mixed with pineapple and orange juice and topped with nutmeg. It’s perfect for an after-dinner drink. While the “Mana Tea,” another favorite, is more refreshing, albeit it more alcoholic. It consists of Smirnoff vodka, Beefeater gin, Flor de Cana rum, Juarez tequila, Midori, lemon juice and Sierra Mist. As the party came to a close, a fire dancer performed in front of the receding sun.

Kane Tiki Bar and Grill is located in the Marco Island Marriott Beach Resort and Spa at 400 S. Collier Boulevard.