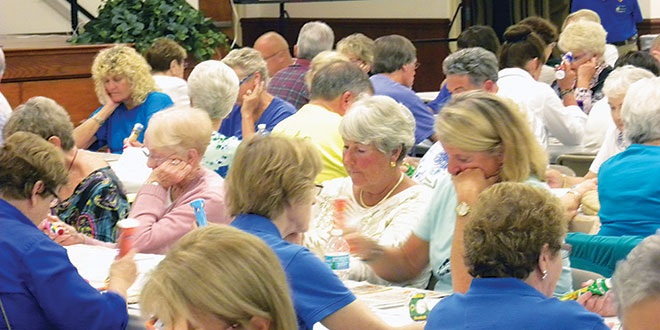 The San Marco Church Knights of Columbus Bingo pulled in almost 500 players in the first two sessions of this season — the most players ever. 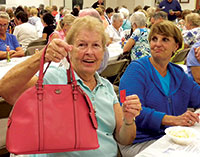 cool, which usually makes Bingo a more attractive entertainment alternative for seasonal visitors, but there was still a record crowd for the second night of bingo, which had great weather.”

Bingo Financial Chairman Dennis Pidherny said, “This year, there seems to be more visitors to Marco Island, and that certainly helps our attendance numbers.”

There were some big winners in the crowd. Peg Kloiber of Isles of Capri won the Coach bag on Thursday and called the prize

Deputy Grand Knight John Caltibiano said, “This is the second year that we are offering a Coach Bag as the Grand Prize, and the higher attendance recorded last year is continuing this year.”

A Coach bag will be the special prize at all bingos this year. 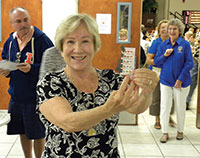 Beverly Trotter is the big winner on the $500 Pull Tab.

of the area, including Habitat for Humanity, the soup kitchen in Immokalee, bike safety on Marco, the Catholic Faith Appeal and many other worthy causes. Knights’ donations also include college scholarships for local students.

Knights of Columbus and Columbiettes, the women’s arm of the organization, are all volunteers working as cashiers, floor attendants and bingo callers.

Bob Brown, Bingo chairman said, “With Bingo attendance up 40 percent so far this year, we are fortunate that we have dedicated Knights and Columbiettes to handle the crowds.”